It's really not that hard. 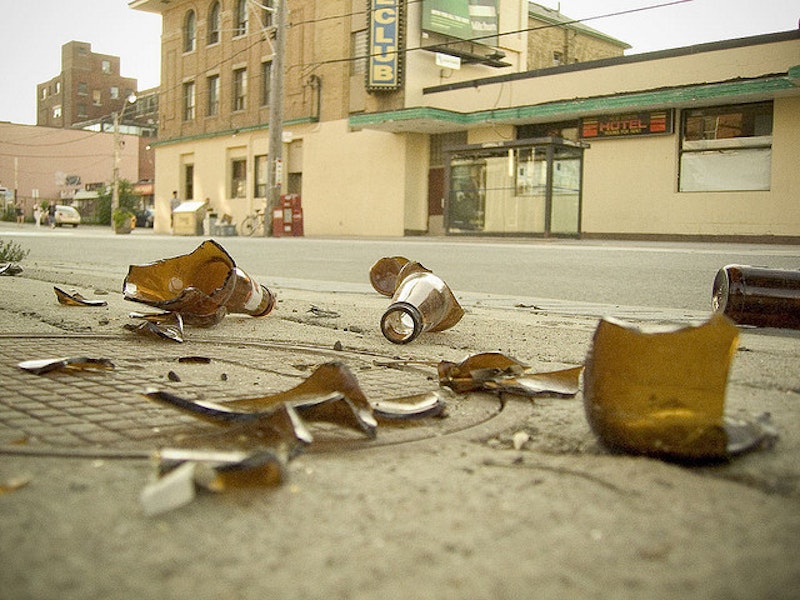 Students, high school or college-aged, are going to be students: they’re going to party, hard. In private, sure, but occasionally out in public. In public, they will party on boulevards, on porches, or in self-deluded invisibility on backstreets and in alleys. It was always thus, and forever will be, and railing against this reality is a fool’s errand. Often these public celebrations of youth and intoxication are accompanied by the travelling consumption of libation. The three results below usually follow:

Smashing. Cans are crunched, or bottles are smashed, in drunken, fuck-society outbursts that are often accompanied by hoots and hollers. This is dangerous and unseemly, and can have the effect, in daylight, of making the streets and sidewalks of small college towns resemble those of inner cities.

Littering. Kids drink on the street and absent-mindedly leave their empties for others to discover.

I’m not here to call students on every aspect of their bullshit; after all, I once staggered in their shoes, sometimes not knowing where I was going or why I was going there.

But smashing bottles is stupid, destructive, and only momentarily satisfying; I did it eons before I could drink, was caught, and punished. But with apologies to pedestrians who are disinclined to tear themselves away from mobile devices, just ask yourself: what’s worse, shattering an Olde English bottle against a wall alone, or venting spleen in a brawl, or by driving drunk? There are worse ways to express post-adolescent frustration. Caching, on the other hand, is just straight-up idiocy, or the will showcasing of idiocy; most of us grow out of it eventually, and it doesn’t directly hurt anyone.

What bothers me most is littering. Upon venturing out for breakfast on a recent morning, I discovered the unbroken remnants of the previous evening’s revelry strewn in the parking lot of my apartment building; it didn’t appear that any property damage occurred, thankfully, but the lot is bordered by two containers: a recycling bin and a dumpster. Neither is locked. Neither is difficult to access. It would have been easy—really, really easy—to dispose of the evidence, with no one the wiser. But these kids said “fuck that,” left their shit behind, and staggered back to whence they came.

I cleaned up the empties. The people who live in my building are adults with lives and problems; there are two graduate students, too, who make a point of recycling their bottles. None of us are going to sit on the parking lot and call the police if the partiers ever return, because none of us have time.

Again, students are going to be students, but the act of disposing of litter—sober or not—requires such minimal effort that the failure to do so, given the fact that anti-littering statutes are drilled into most of us from an early age, is baffling.