The Simple Joy of Papusas

Found even in the most unlikely places. 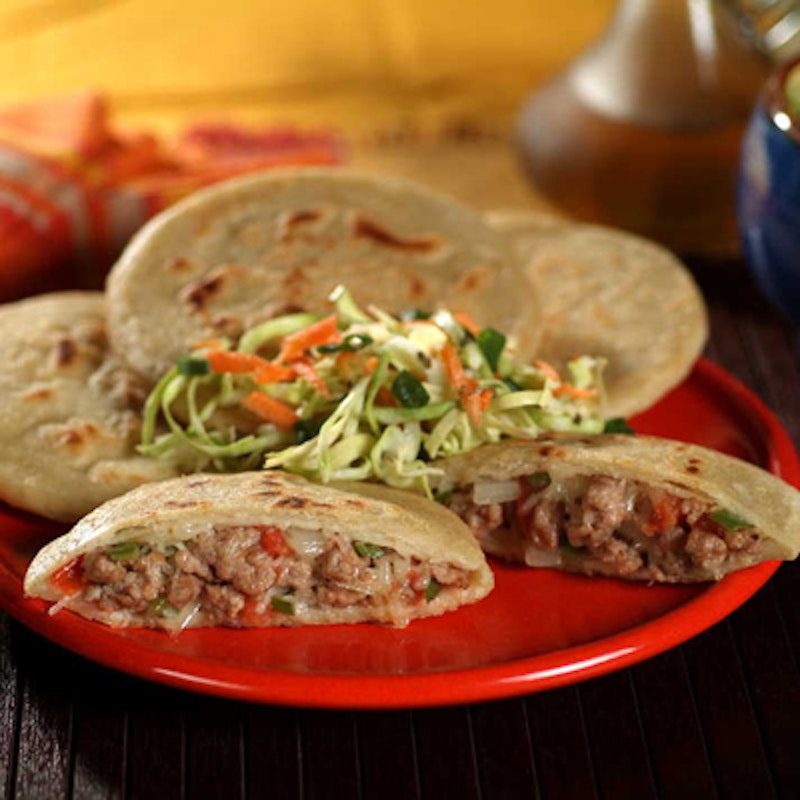 Papusas are wonderful. A staple of El Salvadorian cuisine, papusas are made of thick tortillas fried to a golden brown and about the size of a smallish pancake. They’re usually filled with combinations of cheeses, herbs, pork and chicken.

I fell in love with the beautiful discs of fried goodness near the haggard and heavily trafficked Wonderland Ballroom in Columbia Heights, Washington, DC. In the middle of the block there’s a non-descript joint—as in, you’d just power-walk on by to your next $8 pint without noticing—called Il Rinconcito Deportivo. A can of Tecate is a few bucks, the papusas themselves are stolid, and overall is the best mid-evening food detour you can find in the area.

It was just outside DC, in Arlington, Virginia, though, where Il Rinconcito Deportivo grew distant in my appreciation. El Charrito Caminante, at 2710 Washington Blvd. Arlington, VA 22201 (cash only; shabby ATM on site), offers hands down some of the best Mexican fast food I have ever had. That they sport glass-bottled cokes (the stuff made with real sugar that you can’t get really get in the States with any sort of regularity) is nearly too good to be true. At El Charrito the papusas are never frozen and you can absolutely taste the difference.

But to bring this post a bit closer to home for Splice readers, let me tell you about the MVA off 270 near Frederick.

Last week I camped out at the DMV with the intention of securing temporary tags for a newly purchased car. I logged about four hours of wait time, and I was only saved by the recent purchase of a ludicrously complicated smart phone. I thumb-twiddled a few hours figuring out how to save someone’s contact information.

Waiting for your number to come up—you’re never more a number in the system than when you’re at the DMV—you can’t help but notice the same despair etched across the faces of countless others. The frustration pools under their eyes, weight is shifted from one foot to the other. Everyone is on edge. The malaise quickly swallows the occasional bursts of laughter.

Okay, short story long, after hours and hours I finally staggered into the heat clutching my new plates—War of 1812!—and made for my car. Circling the building to get back to the highway I saw that outside that DMV were no less than three—three!—papusa and taco trucks. Barely able to contain myself and famished, I went to the one in the middle and picked up a few scalding hot beauties for the ride home. It was a joyous aftermath to an otherwise bruising war of bureaucratic attrition.