My Child Is An Honor Student 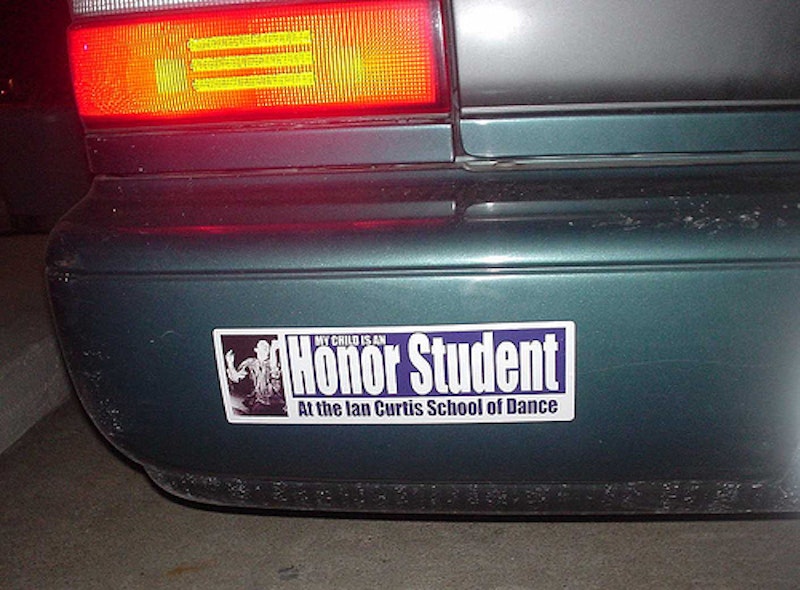 The United States of America is an ideal place to practice kidnapping and extortion. Social-media data poaching, phishing, myriad varieties of identity theft: these approaches require some degree of technical know-how and finesse. But old-fashioned skullduggery demands and rewards patience, petrol, and keen observation, because increasingly, pride and exhibitionism trump the sort of common sense predicated on playing things close to the vest. Americans make it so easy. We advertise.

Is it necessary to hack into a database or stake out a Tudor or small-talk one’s way into the confidences of neighbors to take the pulse of a family? No, it isn’t, because there is—on the part of many—an obsessive need to decorate minivans and station wagons and sedans with stickers indicating that Kayla is #3 or Timmy is #48 on one team or another. See that Escalade over there? That Escalade belongs to Mark and Tammy and their kids, James and Mary; I don’t know that because I’m psychic, or a stalker, but because this trend of casual, TMI advertisement has infiltrated mainstream America.

What’s most frustrating for me is that as a law-abiding citizen—since I’m not a census taker or, like, Gay Talese—this information means nothing to me as a driver. It is literally meaningless in the same way that chain-restaurant signs on a thoroughfare are meaningless: an additional, extraneous stream of sense-data that benefits almost no-one.

“My child is an honor student” bumper stickers always felt snide, but at least that was an anonymous snideness; the more recent wave of attempts at passive-aggressive automotive familiarity have a desperation about them, an eagerness to seize or lay claim to an unofficial specialness that no-one necessarily deserves. Naked or partially-stickered, your ride is just as likely to sully the atmosphere or kill a hitchhiker as mine is.