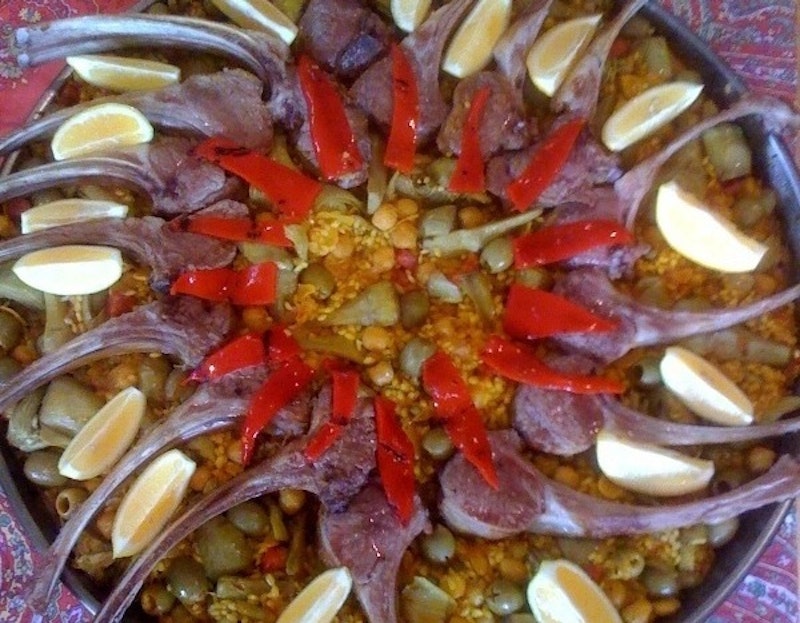 Although the “art of food” has garnered serious notice with the rise of celebrity chefs and network reality shows, the fine dining food world is still fairly removed from what most of us consider art culture. The relationship between the food and music worlds is for the most part one with minimal dialogue. They accompany each other, but rarely do the two mingle on a collaborative level that goes beyond thematic or geographic similarities (e.g. Cajun cuisine and music). When pianist Myra Melford approached chef Paul Canales a few months ago looking for ideas to help raise money for UC Berkeley’s jazz improvisation department, it made sense for two innovators of their craft to go beyond convention and explore how food and music could interact, respond and inspire each other.

It’s not often you find an executive chef of an upscale restaurant in northern California with a punk-rock star history and an affinity for metal. Or maybe it is—maybe this is the meat of all fine dining and we’re just fooled by the ties at the doorway. The experience of walking into the bourgeoisie realm of pressed linens and polished wine glasses on a Saturday morning and being confronted by a screaming electric guitar soloing behind an impassioned discussion regarding scallops and hachiya persimmon is fantastic.

“For me music has always been the inspiration for any creative endeavor that I’ve ever done in my life,” Canales said in an interview. And while his culinary creativity almost always has a soundtrack, in the past few weeks with Melford and her group Trio M (Mark Dresser on bass and Matt Wilson on drums), Canales has been able to channel this type of music to food inspiration into a specific collaboration.

Melford, Dresser, Wilson and Canales began this dialogue by sending each other creative inputs (mp3s, scores, conversation, photographs, titles). One of Dresser’s scores titled “The Canales Rose”—a composition utilizing Schoenberg’s twelve-tone row method—was written after eating a meal prepared by Canales. Dresser later sent the score to Canales, who then ran wild with both the visual and aural aspects of this and one of Melford’s scores as he tried to conceptualize them into food. “I was thinking, what would a raga be like, this is not a raga, but what would a sense of a rolling, free line be like in food. Well, it would have to be a layering of flavor that would have lingering effect, like a lasting sense, whatever you got in your mouth texturally, whatever you got on your tongue. So I used things like saffron, because saffron has that effect of multiplying itself in different ways on your palate over time.” What resulted was “Yours, Mine, and Ours,” a tuna pickled in saffron, onions, garlic, cloves and bay leaves.

This sending of aural and visual cues continued between Canales, Melford and Dresser for a few weeks leading up to the fundraising event at the end of April called, “Cooking it Up: Connections between Improvisations, Music and Food.” This private event drew about 40 fortunate (and affluent; tickets were $100-$200) people and was hosted at the Maybeck Recital Hall In Berkeley. If you’ve ever heard any early 1990s solo piano recordings released by Concord Records, then you know what happens in this unfinished, clear-heart redwood performance space.

Just a few days before the event, Canales joked about Wilson’s lack of input in the project, which promptly resulted in a parking lot phone conversation between the two regarding the geography of the drums, where each piece came from and how Wilson negotiated ideas of collision, alignment and consonance in his approach to both playing the drums and experiencing food. The outcome took the form of a Spanish spreadable salami made with spices from North Africa and sweet peppers from the Americas, drizzled with sava and miso and served with polenta chips.

“Basically this was Matt’s idea of the drum set, and alignment and collision because there’s salty and sweet, super intense, and very mild spicing, all happening in this one dish,” Canales said. This dish paired with a drum solo plus commentary from Wilson was probably the most ostensible collaboration due to the geographic pairings of food ingredients and the geographical history of a modern drum set.

According to Canales, this won’t be the last of his involvement with musical improvisations inspired by food and culinary dishes inspired by music, “What I’m not interested in is an art exhibit with a combo that’s catered with a little bit of food.” Most of the time, as audience members, we don’t even notice the lack of interaction between our sensory appreciation of an event. It all just feels like an art exhibit, a concert, or a dinner party, that happens to be decked out with extras.

The seriousness of fancy food is akin to the seriousness of any form of high art, and it’s exciting to see people take a step away from their own agendas as musicians and chefs and instigate an inclusive conversation where taste informs sound and vice versa. Granted, an event with food aficionados geeking out with jazz enthusiasts isn’t a revolutionary collision between social spheres. But it is an experiment that gives food and music events more intention, and forces us as audience members to engage a little more with what’s in our mouth.