Unreported money runs rampant in India, at the expense of the government and lower classes. 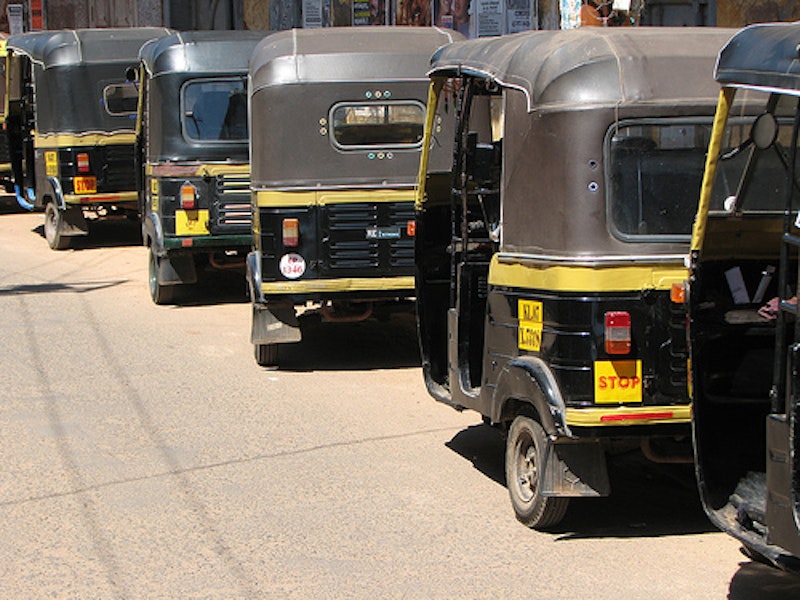 I hate getting screwed by taxi drivers. I've been to two countries where battling cabbies for accurate fares is a regular part of life and, unfortunately, I'm living in one of those countries right now: India (the other was Morocco). I don't know why this bothers me so much; maybe I just hate when people try to take advantage of me—especially based on my nationality. Maybe I just hate dishonesty in simple business transactions.

It certainly isn't the price that bothers me about India's cab situation. Converted to dollars, an average auto rickshaw ride—about 15 minutes—in Delhi costs about 80 cents. Morocco was a bit more expensive at about three dollars per ride, but still, we're not talking about big bucks here. In Morocco, the constant fight was convincing the drivers to turn on their— mandatory—meters. An unmetered ride, even with negotiations, often cost as much as four times the actual price of the ride.

I was a bit surprised to find that the prices from Delhi's auto drivers—or "taxi wallahs"—generally weren't nearly as outrageous as their Moroccan counterparts. At most, prices may be doubled—in tourist areas they can get a bit higher than that—but typically the taxi wallahs quote you a price about 30 rupees (60 cents) above what the ride should actually cost. In my five weeks here, I've had a single driver agree to use the meter. This was pretty frustrating, but about a week after arriving I noticed that despite agreeing to a price with my driver, he had left the meter on. I was able to watch and figure out exactly how much the ride would have cost if I had paid by meter. And—surprisingly—the meter price was higher. I've now gotten more than a few discounted fares by opting for bargaining instead of the meter.

Simply put, by not running the meter the driver keeps the transaction under the table. The first time I got take out from a posh local restaurant chain, I thought they were trying to rip me off when my total was higher than the prices listed in the menu. I stood, waiting for my food, stewing about the situation, assuming I had been handed a foreigner tax. Then I looked at my receipt—which came with my food—and realized that I hadn't paid a foreigner tax at all, I'd paid actual, legitimate taxes, a 12.5 percent tax that's supposed to be universal.

This was a bit of a shock. The delicious Chinese food cart swarming with locals, the stalls at markets, and even the upscale local grocers all provided their wares tax-free. At an average pharmacy/grocery the owner pulls out a pad of paper, does some math, tells you a number, and puts your cash in a drawer. If the fried rice has 55 rupees written next to it, then you're paying exactly 55 rupees at the Chinese stall.

India's GDP (http://flagcounter.com/factbook/in) calculation can't be close to accurate. The informal market here is off the charts. I have a friend who works with a combination of individuals and multinational companies (for reasons about to become obvious, I can't really say which field). He makes an upper-middle-class income, especially considering he only claims his work with the multinational companies on his taxes. Everything else is, as he calls it, "black money." He estimates that the government is only aware of about 20 percent of actual income-the "white money." Before he began working with the large corporations, his business was entirely black money. He says the 80/20 split between black and white money is common among the upper-middle class, and other people I've talked to say the same. For the middle- and lower-class merchants and drivers, I imagine the split to be even more in favor of black money.

It's bizarre managing my finances here because everything exists in cash. I can calculate about how long it takes to spend a withdrawal, but I don't have the paper trail of restaurants and stores that I could find on my credit card bills before leaving America. My infrequent credit card use isn't due to lack of desire. Indeed I'd much rather limit the horrid foreign withdrawal ATM charges and hoard small bills—without which life becomes increasingly difficult because, apparently, I'm the only one with change in the entire country. Unfortunately, the only places that accept credit card are nicer restaurants-generally overpriced to begin with, and then you have to add the taxes—and multinational chains like Reebok or United Colors of Benetton, whose prices compare to those in the West. If you're paying with a credit card, you're not getting a good deal.

The Indian government would benefit from steering people toward credit card use. Without the paper trail of credit card use, the government is losing out on a ton of tax dollars—especially from the upper-middle class. Everyone I know that started a business here did so without a bank or credit loan and strictly on accumulated capital from their family. These businesses operating outside the bank-backed white money market are a built-in advantage that hurts the lower classes that will never be able to acquire enough raw capital to start their own business without the help of a bank.

One of the primary jump-starters for the Indian economy in the last 20 years was the tearing down of the License Raj, the red tape and bureaucracy that held Indian business hostage for decades. The Indian government, in my opinion, ought to find a way to steer the middle and upper classes toward credit card use, though by avoiding the diktat of regulation. Perhaps the answer is a series of tax breaks for upstart local—or even large multinational-credit card companies to help increase their presence in the country. The lower-middle and lower classes are probably not yet in a position to benefit or utilize credit cards, but reining in some of the upper-middle class's black money would do wonders for the government and be a major step in the long process of bringing greater transparency to the business world at large.