We're back with more lessons of what not to post on the internet. 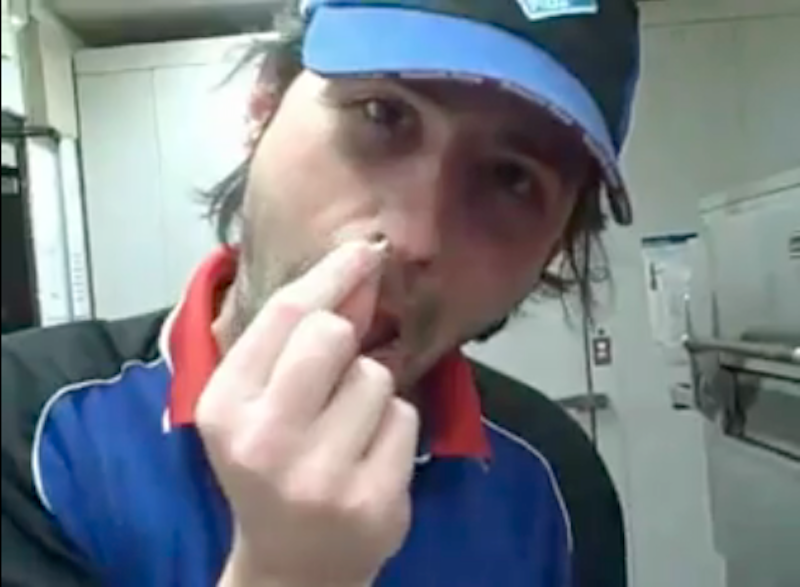 In case you haven't seen it yet, there's now yet another reason to never eat at Dominoes again, namely these two people, who may, for all we know, be taking orders at your local pizza joint.

The rundown: one of these two fine, upstanding food service workers (probably the lady with the camera) posted the video linked above to YouTube sometime yesterday. After a few hours, I guess she got the idea that YouTubing a video showing how her and her fellow employees stick cheese up their noses and fart on the food was unbelievably fucktarded so she took it down. But as often happens with things posted on the internet, other people saw it. One concerned Dominoes-loving citizen took it upon himself to repost the video, and start an online campaign to get these two fired. No word yet from the Dominoes PR people, but I guess MadTV ("bacon butter cheese fart pizza" indeed) and The Onion weren't too far off the mark.

If getting fired via YouTube is too old school for you, Twitter is making it easy to lose your job in 140 characters or less. I'll let Helen Popkin give you the scoop:

A recent tweet by one would-be Cisco employee proves that when it comes to placing a permanent black mark on your resume via the Internet, Twitter is now the tool of choice. To illustrate, here’s the tweet the now Web-infamous "theconnor" shared with the world:

"Cisco just offered me a job! Now I have to weigh the utility of a fatty paycheck against the daily commute to San Jose and hating the work.”

"Who is the hiring manager. I’m sure they would love to know that you will hate the work. We here at Cisco are versed in the web."

Dubbed the "Cisco Fatty," the story spread like wildfire across Twitter, spawning both a YouTube parody video and a commemorative website, featuring the contents of "theconnor's" deleted homepage. The lesson here, according to Popkin: "The internet is not your BFF." You've been warned.