Gov. Martin O'Malley won reelection by some 14 points and is a rising star in the Democratic Party—he also has a $2 billion budget gap to close. 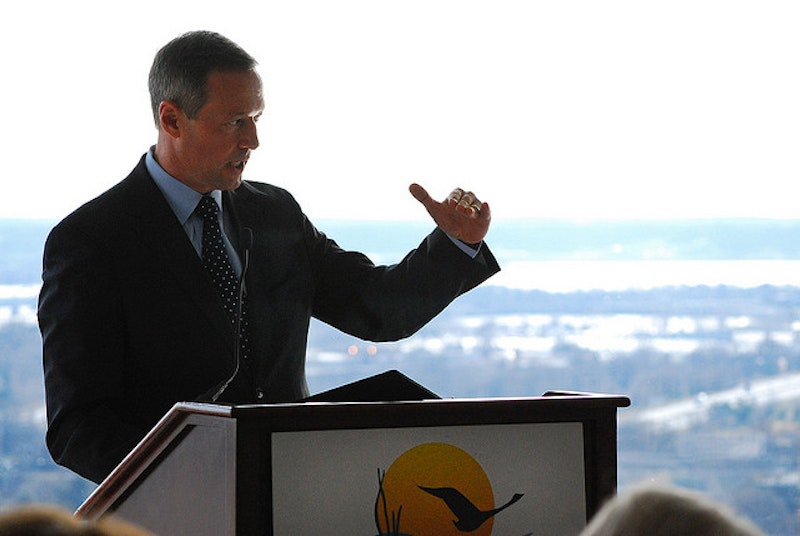 Over the years, the rap on Gov. Martin O’Malley (D) is that he’s an ambitious politician with a national agenda that includes the White House. He now has his passport, if he chooses to use it, that could convey him to the highest echelons of the Democratic party and everybody’s person-to-watch list. Simply put, don’t sell the guy short.

O’Malley, as every political hobbyist knows, was recently elected chairman of the Democratic Governors’ Association, whose ranks were shrunk to 17 by the November wave of voter discontent. But against that national surge, O’Malley not only survived the winnowing of Democrats but won by an astonishing 14 percentage points—more than double his 2006 margin—while others in his party were struggling to cling to office if they were able to hang on at all. O’Malley had been the association’s vice chairman for two years, almost a guaranteed claim on the top job. In the number two role, he traveled the country raising funds and, where he was asked, spoke in behalf of fellow Democrats.

The chairmanship of the governors’ association presents O’Malley with an opportunity to step onto the national stage as a fundraiser, speaker, and expert witness before committees of Congress and a sought-after counselor on state matters at the White House where he is already a welcome presence. Along the way, he’ll collect IOUs and phone numbers to fatten his Rolodex. Now in his final four-year term, O’Malley will be in a position to forge his fellow governors into a constituency of support for his attempt, if he decides, at a future resume upgrade. The trick will be the delicate dance between effectively managing Maryland through its economic and budgetary miseries while subtly cultivating whatever national aspirations that might motivate him.

There’s nothing wrong with a politician, or anyone else, for that matter, who’s ambitious. Be wary of one who isn’t. Ambitious politicians usually equate opportunity with performance, and they get things done to advance themselves while administering large doses of anesthesia to mask the intensity of the personal drive.

For years, governors have grumbled quietly that they’ve been ignored by the national press corps who devote their coverage to members of the U.S. Senate out of convenience, accessibility and star quality. But the Internet and cable news have dramatically altered the competition as well as the coverage into equal opportunity exposure. Today, cable news is everywhere the action is, and the social media has created parity between Washington’s elite and the politicians in Palookavilles across the nation. Interestingly, Barack Obama is the first president to be elected directly from the U.S. Senate since John F. Kennedy in 1960. In that interregnum, four governors have ascended to the presidency—Jimmy Carter, Ronald Reagan, Bill Clinton and George W. Bush.

Students of Freudian psychology, which teaches that there are no such things as accidents, will recall that Spiro T. Agnew was plucked from the obscurity of the Maryland governorship to become vice president because of a single speech denouncing blacks. Agnew went on to develop a national constituency of his own through his hard-line views and overstuffed speeches.

Gov. Parris Glendening was chairman of the Democratic Governors’ Association where his son, Raymond, is now political director. Glendening used the position not only to raise funds to help elect Democratic governors but also to further his mercantile interests in his political afterlife.

Jimmy Carter never won the esteem of his peers and therefore never held an official association position during his years as governor of Georgia. But he used his office and his civilian years to pester his way into the Democratic National Committee and eventually the presidency. Carter convinced the DNC chairman, Robert Strauss, to appoint him as special liaison to the nation’s Democratic governors. Carter used that titular position to collect polls and other political intelligence from governors which became the battle plan for his 1976 campaign for president. Bill Clinton’s springboard to the presidency was, in part, the Democratic Leadership Conference, a centrist organization which he helped to found as governor of Arkansas. And California Gov. Ronald Reagan, while never a governors’ conference official, used their meetings as platforms for his hard-edged conservative views. Nor was George W. Bush active within formal associations as Texas has what is structurally the weakest governorship of any in the country. The House speaker runs the state.

O’Malley can fashion his role and his future as he chooses with the professional help the DGA now offers. But the conference of Democratic governors is the perfect vehicle through which to build a national following among elected officials, especially with a presidential election only two years away and a number of governorships up for grabs.

Another great advantage for O’Malley is that many of the national political reporters who cover such activities as the DGA are among his Maryland constituents. They work on one side of the Beltway and sleep on the other. And with Annapolis only 45 minutes from the nation’s capital, the telegenic O’Malley will be the go-to governor whenever a Democratic spokesman is needed on issues or politics. He is a smooth and seasoned performer on television as well as at the speaker’s rostrum. On the downside, however, is the disadvantage of Maryland’s pismire size and its relative unimportance in the national scheme of things with only 10 electoral votes. But modern communications may have overcome that handicap as well.

O’Malley is no stranger to the limelight. For most of his public career, O’Malley has been active in peer organizations. As mayor of Baltimore, he came to life in the national association of mayors following the carnage of 9/11. O’Malley became a national spokesman for his colleagues on the issue of national security, mainly because of Baltimore’s port, and frequently testified before committees of Congress to advance mayors’ concerns. Because of his work on national security, O’Malley was chosen for several showcase speeches—at the 2004 Democratic National Convention in Boston and by the mayors’ association to deliver a radio response to a presidential speech. As governor, he has assumed very much the same role through the National Governors’ Association.

O’Malley is beset by fiscal problems in Maryland as the newly elected General Assembly prepares to convene, no worse than many other governors but much better than most. The first task at hand is to close a budget gap that is rapidly approaching $2 billion. His rising status as a national Democrat mimics what could be considered a parallel career. Success at one will benefit the other. But as a shrewd politician, O’Malley no doubt understands the natural order of things: First things first. The rest will take care of itself.