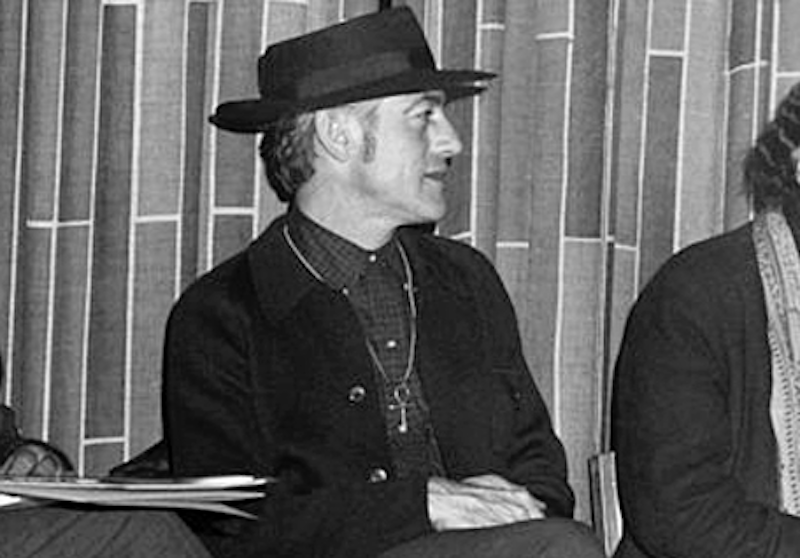 Lithic Press, in Fruita, Colorado, has quietly, for the last few years, published lost and found and forgotten texts by less-well-known poets of the Beats and San Francisco Renaissance. Most recently, they’ve uncovered a sort of “lost” text by a poet most people outside of California haven’t heard of: David Meltzer, who died in 2016. His book, Rock Tao, a long-form collage essay, captures the San Francisco music and poetry scene of the mid-1960s.

For those readers who haven’t heard of Meltzer, which will probably be most, editor Patrick James Dunagan has written an introduction and, even more interestingly, has included two afterwords, one by Julie Rogers, his second wife, and another by Marina Lazzara, a fellow San Francisco poet, teacher and musician. Reading all three before diving into the text is helpful, for a little more context. Rock Tao was never published Meltzer’s lifetime, apparently.

I hadn’t heard of Meltzer before this, though he has had many books of poetry and fiction published from the 1960s on up until 2011. The only anthology I’ve ever heard of him being published in was the famous Don Allen The New American Poetry. Yet he had a thriving poetry life in San Francisco for decades. According to Dunagan and Lazzara, Meltzer knew many of the older Beat and San Francisco Renaissance poets, like Allen Ginsberg and Kenneth Rexroth, and was friends with the next generation poets like Jack Spicer. He also was a musician, and playing in bands in the middle of the flourishing rock scene centered in San Francisco, friends with, for example, Janis Joplin and David Crosby. He was a “connector” between those two worlds.

Meltzer, along with his first wife, Tina Meltzer, formed a psychedelic band called The Serpent Power at this time, with an album of theirs making it to Rolling Stone’s Top 40 list in 1968. But, according to Lazzara and Dunagan, he became disenchanted with the rock scene, and quit to devote himself to poetry. He eventually became a professor  at the New College of California, where he taught for the rest of his life. And he remained active in the San Francisco poetry scene. Rock Tao, which he wrote in 1965, hints at his unease with the rock world:

Fire: the burning Buddhist monks of Vietnam; Giacometti, the sculptor—“But the thing, the suicide, that really fascinates me, is burning oneself alive. That would be someth9ing.” Fire renews what it destroys. The burning man alive with fire (David Schmuck) races over a hill to escape his pain & embrace his spirt. D. H. Lawrence, the emblem of the fever of his tuberculosis. Fire turns the meat of flesh to fragile ash, lightening the ponderous massiveness of the body into particles taken up by the wind, or slowly eaten by the earth.

Fire suicides are becoming more frequent in America. Yesterday a marine immolated himself because he was deeply unhappy about Marine doctrine & training. A few months ago an elderly lady in Detroit ignited herself because she was outraged by the American war effort in Vietnam.

Speech as fire; art as fire. Flame’s heat as a cleansing power. Fire as a baptismal rite.

That’s from the beginning of Part 2 of Rock Tao, an unusually long piece of Meltzer’s writing. Much of the book is chunks of outside text. Here, most interestingly, is his own summary of incidents which I’d never heard of. I’ll take his word they happened. Rock Tao is a historical document, chronicling forgotten news. His interpretation feels odd: that he’s glorifying the idea of immolation, taking real people’s tragic lives and turning them into inspiration for poetry. That wasn’t sustainable.

Even Dunagan admits that Rock Tao isn’t an easy read, calling it “a rather erratic beast of a text.” It’s a messy collage, of items heard on local rock radio stations, flyers, and overheard conversations. And it can be an assault on the eyes, if not the ears, with word-for-word transcriptions of advertisements from magazines. Here’s a representative chunk:

Watch them grow their own hair

Live in your own room!

Yes, can you imagine, you can even give them haircuts! You can actually have the fabulous Beatles growing in your own room!...

Rock Tao can serve as an historic document, but reading that many advertisements can be difficult. When Meltzer is writing his own words and ideas, he’s engaging. But sometimes the text is unclear whether it’s Meltzer, or Meltzer borrowing from some other text. I’m sure he wanted the reading experience to be that way. The limpest chunks of text are excerpts from popular rock songs at the time, like from the Rolling Stones or Donovan (he never quotes the Beatles or Dylan). Meltzer is most interesting when we’re getting his critique or witnessing. Like this glimpse into the Beat Generation and a seeming lost potential. Remember this is written in 1965:

10 years ago the poets almost had it.

The Beat Generation image was the public’s necessary scarecrow-placebo: Poets embrace fame ultimately to question it & to finally reject it.

It’s a singer’s world today. Tired of talk (or used to it) people wish to be sung to, to have the world re-named & reordered by singers & their songs.

I see a little dig at Ginsberg here, perhaps, and who didn’t question it or reject it at all. Meltzer is correct that for a brief period the Beats and San Francisco Renaissance poets had the public ear, and eye, in the late-1950s. But then came The Beatles and Dylan: people could get their poetry in more accessible, if simplified, form. Meltzer at this point hadn’t quit the music scene—this may in fact be him explaining whyhe’s in the music scene—but his unease with fame seems on a collision course with his love of poetry, even if he doesn’t seem to realize it yet.

“Tao” is the classical Chinese term for “the path” or “the way,” as in the Tao Te Ching (or Dao De Jing, or the Daodejing) which gained popularity by that time, in different translation. I don’t see this long-form collage essay as “The Path of Rock” nor “The Way of Rock”—another title might’ve helped center this text. Though it does read as Meltzer’s subconscious path outof rock.

Dunagan sees the books as a continuation, in style, of John Dos Passos’ style of “America awash in media.” I also see it as the precursor for Joan Didion’s collage essay book Slouching Towards Bethlehem, though I don’t think she ever read Rock Tao. Didion was chronicling the fall of the Hippie movement by 1968. Meltzer’s Rock Tao hints at those things to come: Reading it, that world doesn’t seem sustainable, which is what Didion captured. And why Meltzer got out.