Surveillance and a Festival in DC

I went for the cherry blossoms but just got intimidated. 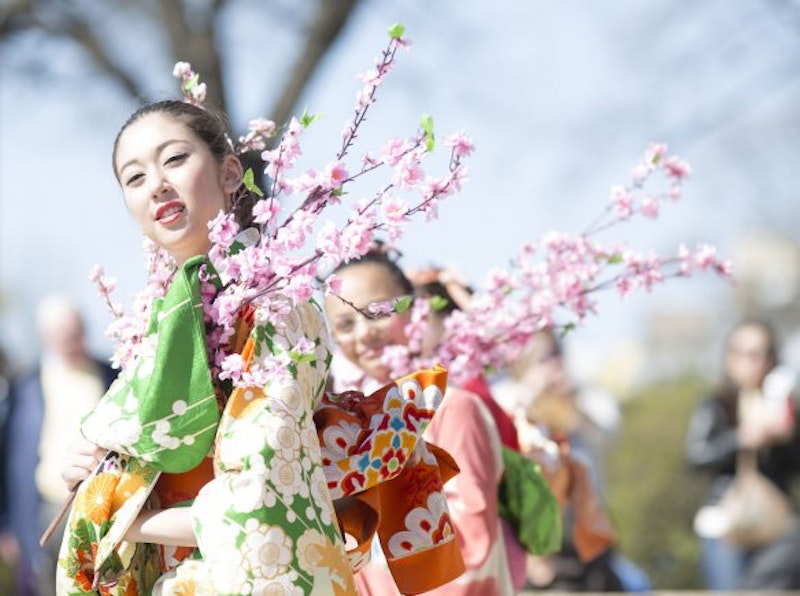 Last Saturday I went to DC with my boyfriend and our friend Emma Kidwell. We had two goals: the Sakura Matsuri Japanese Festival and seeing the cherry blossoms in bloom. Emma is half-Japanese and, since we’ve been friends, has given me about 300 reasons why she wants to take me to visit Japan. So far she’s turned me on to good green tea, genuine ramen and cute anime animals. When we saw advertisements for the festival we figured it was a fair compromise, as it didn’t involve days of travel.

After a bit of expected traffic we made our way into the hectic city. We purchased parking tickets in advance, but police closed the street where our garage was located and we wasted about an hour trying to find one that wasn’t closed. We hardly cared though, since the sun was bright and we spent the time with the windows down, laughing and joking about how the parking gods were smiting us. Eventually we found a spot and were on our way to the festival.

The streets were flooded with tourists. Our little group had to walk single-file, weaving through hordes of increasingly costumed people. As we approached the festival, we saw girls dressed up as anime characters, or in “cosplay.” Emma recognized a few of them and though I appreciated the immense effort that they put into their costumes, many of them had contacts that changed their eye color to look less real, which was creepy. They weren’t the only costumed festivalgoers; we saw Pokemon, Hayao Miyazaki characters, and ninjas. There were also furries and bronies, a peculiar sexual subculture that turns seemingly innocent animal getups and the 1990s children show My Little Pony into erotica. I was intrigued though mildly disturbed. Men and women who are part of the furry crowd wear animal ears and tails to attract each other or their handlers, who walk them on leashes. Bronies are often middle-aged, overweight men who wear My Little Pony shirts and partake in sexual acts involving the children’s show and post about it in subreddits. Furrys do too, if you want to learn more.

Other than the costumed crowd, the festival was completely packed. There were vendors, but it was hard to get to them through the sheer number of people standing and walking around. There were two stages with performances, though, which we enjoyed a bit of from a distance. We saw wooden swordsman and Japanese drummers, which were entertaining. Much of the food was the same, most of it not Japanese but Thai and Chinese. We waited in a long line for fried rice, chicken teriyaki and pad Thai. There were a few that were obviously strictly Japanese, but the lines were excruciating and many were selling out of items like Bubble Tea and sushi tacos. We stayed for a while, but as more people shuffled in we decided to free ourselves from the crowd and walk toward The Mall.

As we got closer, we realized that it wasn’t much different. The cherry blossoms were, for the most part, not in bloom, but thousands of people were there enjoying the beautiful day. The Monument was encircled by dozens of kites and we saw families picnicking on the lawn. We walked toward the White House, which, even after the furries, was when things started to get weird. Secret Service men slowly directed traffic, and an officer with an MP5 machine gun guarded the lawn near the building, blowing a whistle and walking toward people who came too close to the gate. The street in front of the White House was blocked off, and about five different protests were going on between the two gates. Two armed snipers slowly walked around on the roof with binoculars, watching the crowd below. Every streetlamp had two cameras, and armed officers with dogs walked among the tourists. It wasn’t what I remembered DC being like, especially in my youth when my mom and I went often. It was off-putting. But despite the fun, I couldn’t help thinking about that sniper looking through his scope at the crowd.