Shakespeare at the Old Bank

The Chesapeake Shakespeare Company takes over a historic building in downtown Baltimore. 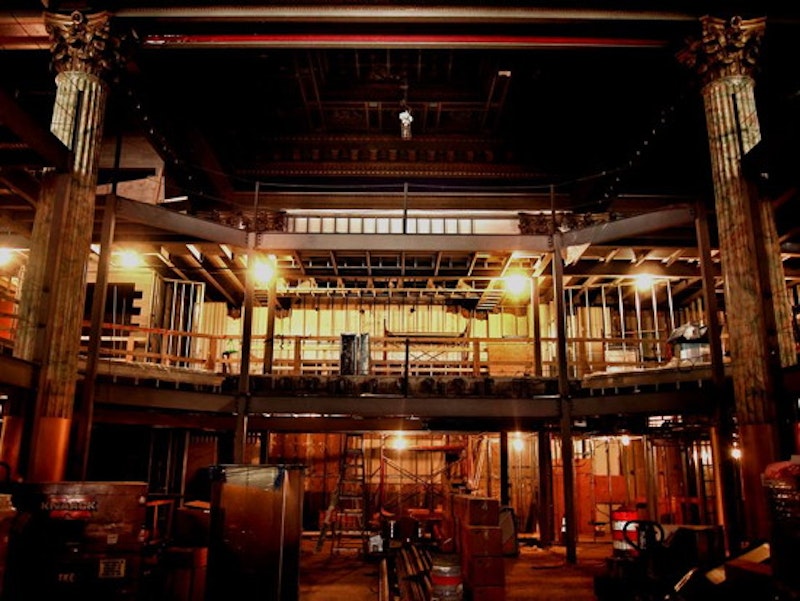 Several years ago, on S. Calvert St. in downtown Baltimore, the Mercantile Trust & Deposit Company was revamped into a shady nightclub. The handsome 1885 red brick building survived the fire of 1904 and is listed on the National Register of Historic Places. Nonetheless, it attracted crime and violence for decades until about two years ago when a Shakespeare acting troupe decided to redesign it and, in turn, the fate of the block surrounding it.

The Chesapeake Shakespeare Company had been performing for over a decade in outdoor venues and an old theater in the up-and-coming but presently undesirable area of Pigtown. In 2013, they purchased and redesigned the old bank into a Globe Theatre-style 260-seat playhouse. It was finished in 2014, soon after the opening of Everyman Theatre, located almost next door. It’s been a change of pace for the theater community, especially after the sudden closing of the Baltimore Shakespeare Festival in 2011.

Visitors may recognize that the building was once a bank, especially by the box office, which is located in an old teller’s booth. You’d never guess that it was a nightclub. Large columns and an intricate high ceiling adorn the inside, where there are multiple levels of seats wrapping around three sides of the stage. Each floor has a bar where cocktails are served before, during, and after the performance.

Emma and I visited the theater on Friday night for a showing of Romeo and Juliet. We appreciated the student discount, which cut the price of our third row, first floor seats by nearly half. Expecting the event to be akin to that of the Hippodrome, we both dressed up. Regrettably, I wore heels. Upon walking inside, we noticed that the atmosphere was more like a festival than an uptight theater. People wore jeans and sandals, carrying glasses of wine and laughing. When Emma and I took our seats, CSC company member James Jager (soon to be Benvolio) walked on stage and began talking to us. I asked him about the history of the theater, which was when he gladly informed me that it was in its infancy. “Let me know if you have any questions about anything,” he said, “the actors will be available to talk after the show, and there will be two dollar beers and wine!” We smiled and thanked him, then laughed about the fact that it was six days until my 21st birthday.

The show ran at a brisk pace, with hardly a dull moment. The actors all had an admirable grasp of the language, which made it easy and entertaining to follow. Mercutio was especially good, with a dark sense of humor and willingness to portray all the dirty jokes that Shakespeare wrote into his scripts. A few of the characters were somewhat reminiscent of those at Disney World, though, both ostensibly and as actors. The second act was abounding with loud crying, almost competitively. For the most part, though, the acting and costumes were excellent. In between acts and before the show, actors went on stage with instruments and sang covers of songs which included lyrics referencing Romeo and Juliet, our favorite of which was performed by E. Martin Ealy, or Lord Montague, who has a brilliant bluesy voice.

We didn’t stick around for long after the show except to compliment a few of the actors whom we particularly liked. Romeo and Juliet runs until May 10, and tickets are available here.