“I’m doing this because of my ex.” 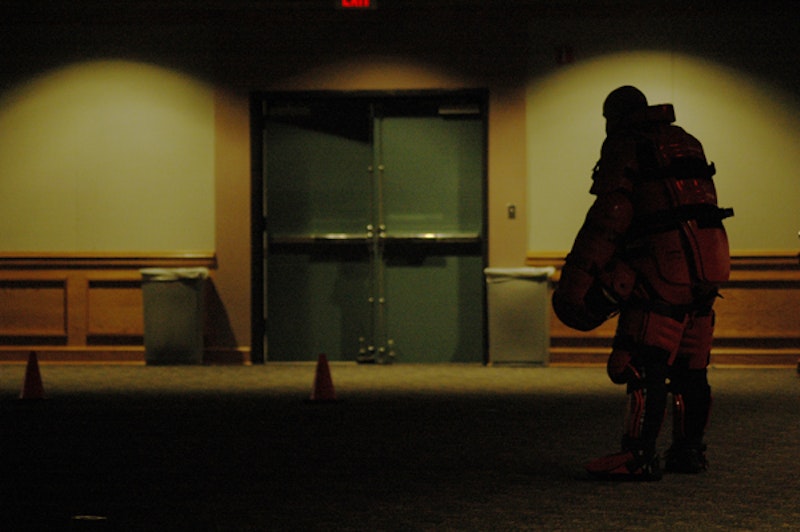 When I moved to Baltimore, most people from the small town I grew up in said the same thing. “Be careful,” they warned, “Baltimore’s dangerous!” I’d nod, but in my mind I was rolling my eyes. I knew the statistics before moving to the city, specifically in areas where I was looking at apartments. Sure, Baltimore has a few more shootings than the norm. Most of it is gang-affiliated, which I am not. I wasn’t too worried.

After moving here, I found my new neighborhood of Mount Vernon, for the most part, friendly and welcoming. It’s artsy and laid-back with plenty of things to see and do. The only downside was the catcalling. It got under my skin more than I thought it could. I’d noticed posters at my school advertising a free seven-week self-defense class for women taught by a campus officer. The decision to sign up was a quick one.

Our first session took place in a classroom where an officer named Brant explained the curriculum. We were given crude textbooks with images that looked like they were taken in 1992. It was then I learned that RAD stands for “rape, aggression, and defense.” A Susan B. Anthony quote was on the front page, “Woman must not depend on the protection of man but must be taught to defend herself.” This brought ostensible joy to the hardcore feminist girl in the class, who felt obliged to tell us stories about every uninvited penis she’d seen. Poor Brant let her talk, trying to tell us what we would be doing in the class. We finished a half hour late. Luckily, that particular girl didn’t show up to most of the course.

For the first few classes, most of the students didn’t talk much. We were taught different stances, the most important of which being our defensive stance. When Brant brought out handheld padding and began teaching us how to punch, something changed. We started laughing and talking, surprised at the amount of adrenaline that comes along with pretending to block and throw punches. A petite law student was particularly pumped up, and in walking back from her turn told me, “I’m doing this because of my ex.” She immediately blushed. “Yeah, that’s part of the reason I’m doing it too,” I told her.

We learned ways to hit, kick, and block from standing and from the ground. Some of the techniques were hard to take in, especially those that taught us how to survive a chokehold or get out from under someone. Others were funny, like how to get a man to stop putting his arm around you. I learned heel-stomps, knee-to-crotch kicks, and hammer-fists, and that the best way to avoid catcalls is to make direct eye contact with everyone on the street.

At the end of the class, we had the option of being part of a simulation in which Brant, dressed in full protective gear, approaches us and we use what we learned to defend ourselves. Unfortunately, I was sick that day and wasn’t able to participate, but once you’ve finished the class, you can take it again at any location to refresh your memory.