My First Trip to Seattle 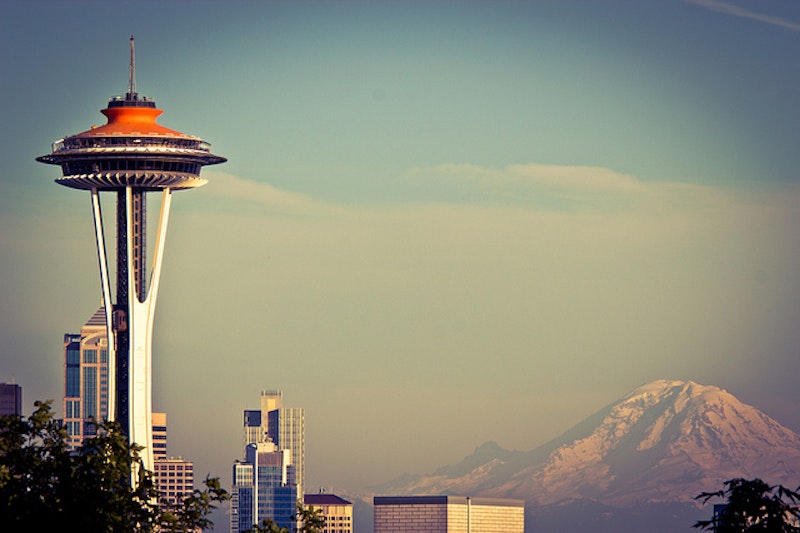 Following the death of my aunt, I decided to take a trip somewhere far away. After fantasizing about skiing the Alps, I settled on a more realistic destination. My friend Raymond moved to Seattle earlier this year and insisted I visit. With the help of frequent flyer points I packed my hippest clothes, gambled my privacy with the TSA, and boarded an awful seven-hour flight. I bought the recently released Gravity and came to the conclusion that the screaming children beside me were preferable to Sandra Bullock’s acting. I watched about half of it.

After hours and lots of peanuts I saw the magnificent snow-crested Mount Rainier, surrounded by craggy mountains. I meandered around the airport for longer than necessary, managing to get lost amidst the gift shops boasting the Freshest Salmon, albeit packaged and vacuum-sealed. When I located Raymond, he was holding a rainbow sign with my name written a dozen different ways and the words “Welcome to Seattle, bitch!’ encapsulated in a speech bubble of a cartoon character who appeared to have smoked a blunt.

I hardly unpacked in his crowded apartment before my brain began its smoky ascent to Mt. Rainier. My body, unfortunately, never quite caught up. My new friends and a very cheerful Ray hiked between towering evergreens. I made them stop at the sight of the mountain above the rushing White River, which looked like the host of many a bear’s dinner. That, I thought, is where the freshest salmon is.

After a few days of napping away my jet lag and exploring the suburban valley of Auburn, we went to Seattle. I dressed in a loose fitted t-shirt sweater with skinny jeans and fluffy boots. With the help of my cat-eye glasses and a mod scarf, I fit right in. When I arrived I noticed that the streets were far cleaner than any east coast city I’d ever seen. Within two blocks the smell hit me; dank, skunky weed right in the middle of the commotion. I realized that these people don’t have to worry about hiding in their bedrooms or cars to toke up. With medical cards and a bit of respect for non-smokers, they can do it anywhere. One young woman I saw sitting on the lawn of a park, happily smoking her bowl, inhaling deeply with her eyes closed. Despite the rampant homelessness, I didn’t notice an abundance of police or criminal activity during my stay. I’m sure that many of those more conservative than me expect a city where marijuana’s legal is filled with red-eyed monsters and reefer madness. I found Seattle to be just the opposite.

Pike Place Market was among one of my favorite detours, winding hallways of under and aboveground shops and stands run by local artisans, fisherman, and thrifters. My wallet got a little lighter as I wove through the people and smells and even tastes of the local fruit that vendors let us sample. I saw the “original” Starbucks, which we learned from a reputable-looking man on the bus was not the actual location of their first store, though it was on the same block. After an uphill climb, we explored the gay-borhood at my friend’s recommendation. Every building and business was gorgeous. We stopped at an organic café called Kaladi Brothers Coffee, where old-school rap was playing.

Seattle is a progressive city, more modern in thought and design than anything on this side of the country. A few days after returning home, I realized that Baltimore has just about as many hipsters per capita as Seattle. I also remembered that I still have an untouched love for my city, no matter how cool the west coast may be.