Reminded of a car accident from years ago. 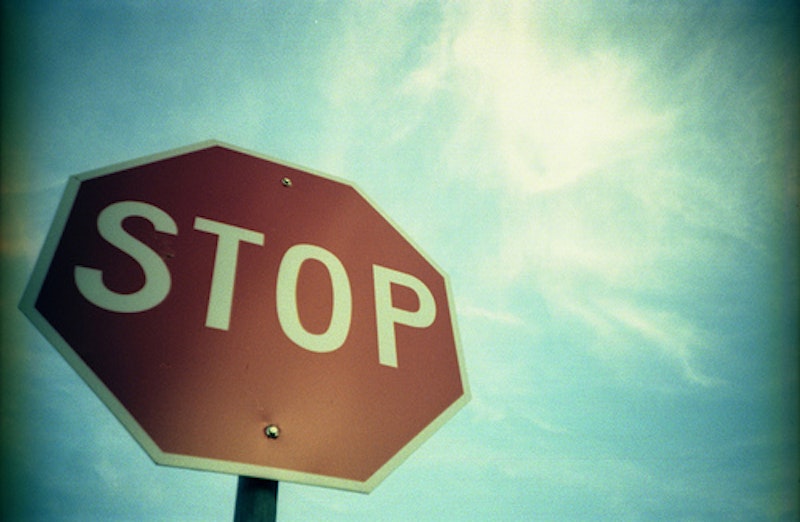 At my yoga class yesterday we focused on core and upper body strength. I’m usually good at staying in poses, but had my collarbone replaced and have trouble with those that depend mostly on arm strength. I was cringing after a few upward facing dogs and had to ask the instructor for advice on how to alter the asanas so I could stay in them. She gave a curious glance to the scar on my shoulder, exposed by the tank top I was wearing. I gave a brief explanation: “I was in a car accident.”

The whole uncensored speech continued in my head, one that I’ve given so many times. I was driving without a seatbelt on and accidentally blew through a stop sign. My Jeep was t-boned by an oncoming car, which threw it on to its side. It rolled a few times and I was somehow thrown out of the passenger side window before it landed upside down, the driver’s side crushed. I landed on my shoulder before I hit my head on the pavement. I woke up to paramedics and the feeling of a neck brace and warm blood under my head and back. My nose was torn and bleeding badly. I was flown to shock trauma. They sewed my nose and found some brain damage, which affected my memory for a few years and a hairline fracture in my vertebrae.

The yoga instructor showed me that if I shift weight on to the edge of my left hand it would reduce the stress on the clavicle. It worked, but meant that I’d have to change a lot of what I’d been doing. I thanked her. At the end of class we went into shavasana, relaxation pose. We lie on our backs and close our eyes, meditating and resting our bodies after our practice. I tend to focus on my breathing and repeat a mantra in my head like “I am here now, I am here now.”

I was in the half-awake state that we try to achieve. Suddenly, the image of a red car speeding toward me came to mind, as though it were happening all over again. I was stunned, and didn’t think to simply open my eyes. I perceived the impact of the car and felt my arms flex as my knuckles whitened, holding on desperately to the steering wheel. I heard the sickening sound of the car being thrown on to the pavement again and again until I felt numbness on my head and everything went black. There I was again, lying on the pavement surrounded by blood. I gasped and opened my eyes, staring at the industrial pipes of the ceiling. I ran my fingers across the metal brackets that are now my collarbone. I took a deep breath, filling my stomach, chest and throat. Dirga pranayama. I closed my eyes, hoping that the flashback was over. I kept my breath steady and began repeating a new mantra.

On the walk home, I promised I’d have gratitude for all the parts of my body that are in working order and not focus on the one part that’s healing. I talked to my boyfriend about the incident and looked at pictures of my car before and after the accident. I showed him one of my face after I went to shock trauma, dozens of stitches holding the flesh on my nose together, my eyes wide with adrenaline and my pupils dilated from morphine. “You’ve come a long way,” he said.