But still uncomfortable with my smile. 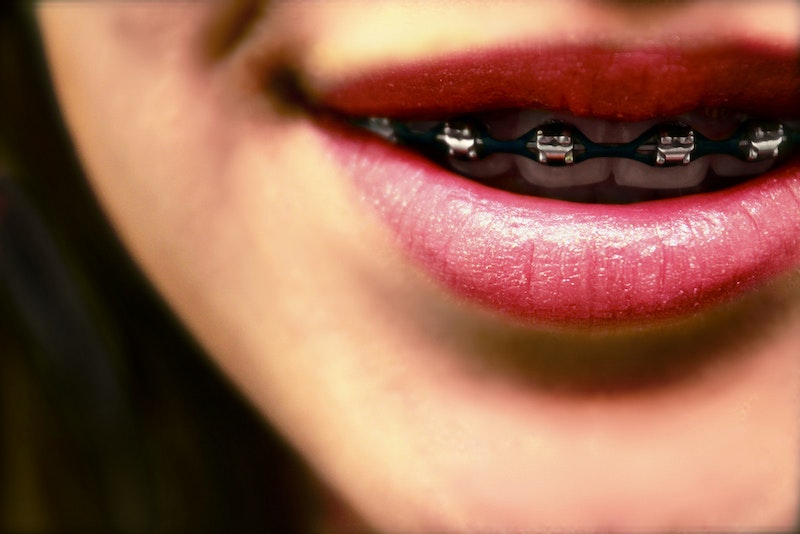 In middle school, like most of my friends, I had a mouth full of brightly colored wire brackets. We’d each try to come up with the best color combinations; red and green for Christmas, orange and black for Halloween. We’d glare at the kids who were able to take out their Invisalign to chew gum. I’d often stand in front of the mirror trying to cover my braces with a finger or toothbrush, trying to see if my teeth were getting straighter. When they were removed in eighth grade, I felt a renewed sense of confidence. A severe overbite corrected, my entire face had changed. Unfortunately, I managed to lose two sets of retainers within the first few months, and after the second one, I was too scared to tell my parents.

Now, nearly a decade later, the overbite has returned and my teeth are overlapped and crowded. I often curse the 13-year-old who wrapped her retainers in napkins and threw them out, twice. A college student now, the thought of spending thousands of dollars on orthodontics is unfeasible. Still, I’m self-conscious about my smile, keeping my mouth closed in most pictures. In my head I’m “smizing,” but the actual result is a pouty-looking smile.

For the past year I’ve researched “affordable orthodontics.” I sent a request to a nearby dental school that claimed to offer discounted rates, but quoted $5,000 for treatment. My insurance doesn’t cover braces. Facebook noticed my search trends and started showing ads for orthodontics. One in particular kept coming up, Smile Care Club, which advertised an at-home off-brand Invisalign treatment. One day I clicked it, and the though the site looked shady, there were reviews on other sites from people who had positive experiences. Many claimed that the customer service was awful, but that they didn’t regret paying for the treatment because, in the end, their teeth were straight.

About once a month, I revisited the site and searched for new reviews. Intimidating articles by traditional orthodontists warned of the dangers of at-home orthodontics, telling readers to suck it up and pay the five grand instead. As time passed, my perspective changed. Of course they want me to visit an office, I thought, this is their business. This week, I saw that Smile Care Club had changed its name to Smile Direct Club, complete with a cleaner-looking website. A search brought me to an interview with the company’s CEO in a magazine called The Progressive Orthodontist. CEO Doug Hudson confronts the issues he’s had with regulatory boards and litigation from Invisalign, but remains hopeful about making orthodontics affordable. Smile Direct Club’s website features a customer service chat room, where someone answered a few of my questions about safety, payment, and the general process of receiving retainers. I was told that the company accepts monthly payments sans interest, and that an in-state orthodontist is available for instances where a visit is necessary.

Teledentistry is not a new concept; it was developed in Baltimore in 1989. Since then it’s been used to treat people, kids especially, in rural areas who’d otherwise be unable to receive orthodontic treatment. The National Library of Medicine National Institutes of Health deems it legit, stating that many general dental practitioners in the UK are on board with the idea. Still, after a lifetime of actual dental visits, I’m hesitant about teledentistry. It’s likely that medicine is moving in this direction, saving money for both the provider and the patient, but it’ll be a long time before it’s widely accepted.