A Scary Day for Lily and Me

Even dogs can have bad allergic reactions. 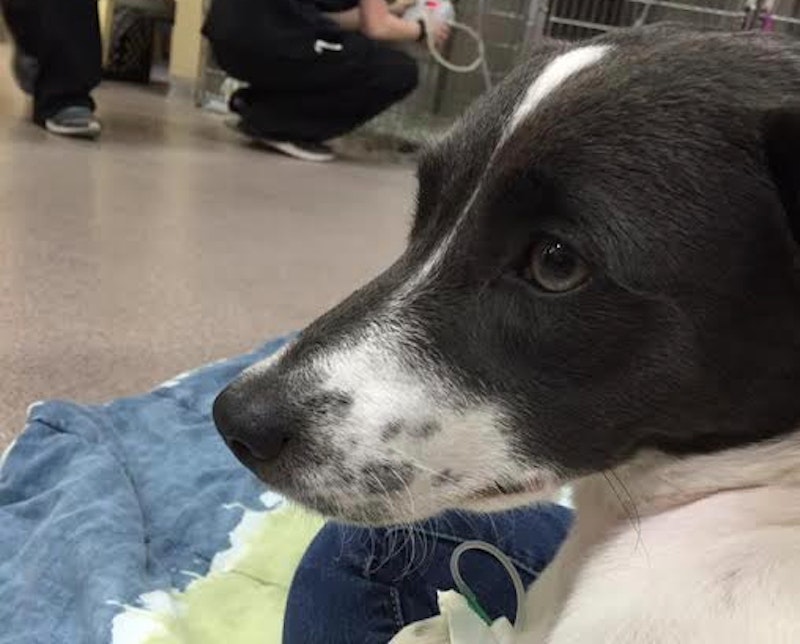 After eating Chipotle’s pinto beans a few years ago, my eyes swelled up like Botox gone wrong and I broke out in hives. I’d never had an allergic reaction, and my hypochondriac tendencies made me fear the worst. Following half an hour of mentally outlining a will, I popped a Benadryl and my eyes deflated. A vegetarian, I worried that I’d become allergic to all beans—one of my main sources of protein. I wasn’t. Plus, as it turns out, Chipotle’s pinto beans were cooked with bacon at the time. They aren’t anymore; and despite my scare and the exaggerated E. coli breakout, I still eat there all the time. Throughout the years, friends of mine have described allergies that ranged from the common (milk) to the scary (antibiotics). I’ve never given much thought to allergic reactions. Last week, though, a terrifying experience made me aware of their seriousness.

Lily, my Border collie mix puppy, has proven to be one of the most adventurous dogs I’ve known. She comes mountain biking, hiking, running, and swimming with my boyfriend and me. Last week she spent five days in the mountains, herding us during the day, sleeping between our hammocks at night. Returning home, we stopped at my boyfriend’s parent’s house in rural Maryland to drop off things we’d borrowed for camping. While unloading the car we called Lily, who sauntered up with her ears back and head down. “She looks suspicious,” I said. We briefly speculated about what she may have been chewing up and laughed. My boyfriend’s brother called to us, saying that she’d gotten sick. She was lying in the lawn in the sun, not uncharacteristic, but when we tried to make her stand she took a few wobbly steps and fell forward, not moving.

We ran to the car, put her on the floor of the front seat, and sped off to the nearby vet. Her pupils were wide. She lay flat, legs stiff, collapsed on the floor. Screaming, I called the vet to say we would be there in a few minutes, that it was an emergency. I sobbed and cursed myself for not watching her more intently. Her breaths grew shorter and shallower, until there was hardly any movement in her chest. I thought we’d lost her. We made it to the vet in five minutes, usually a 10-minute drive. An assistant met us at the door, and they rushed her to the back room where three vets and four more techs were waiting. She was nine months old, for Christ’s sake—not even finished growing. Sitting in the waiting room we Googled her symptoms. I concluded that it was probably anaphylaxis. Online articles described severe allergic reaction as a death sentence for dogs that don’t make it to the vet in time. Outcomes included brain damage and coma.

After 45 minutes, the vet walked into the room, and my heart dropped. He thought it was anaphylactic shock, too, or she’d ingested something toxic. He said she was in stable condition after being given oxygen and an IV. She was awake and breathing. She was in a metal cage, similar to those in animal shelters. A pink bandage covered the IV needle in her front leg. When she saw us, she stood and weakly wagged her tail. Crying, I pet her fuzzy head, and she gave my arm a single lick. We were allowed to sit on the floor and hold her. She was drowsy, but still 100 percent Lily, her gray-green eyes darting around the room to analyze all the activity. She stayed there for the rest of the day, and when we picked her up in the evening, her tail was wagging and she was inquisitively greeting everyone in the waiting room. When she saw us, she ran over and nuzzled her head in our laps, licking our hands, like nothing had happened at all.

Let this be a warning to pet owners of the potential danger of toxins and unknown allergens. I’m not advocating paranoia, though I’d love to find Lily a nice bubble to live in, like John Travolta in Boy in the Plastic Bubble. I didn’t know that anaphylaxis was so lethal, and while it is rare, hundreds of plants ranging from daffodils to apple trees are highly toxic to dogs. If you think your animal has ingested something toxic, follow these instructions and don’t hesitate to leave for the vet. Lily went from healthy to unconscious in a matter of minutes, and we were lucky to be close to a place that could treat her.