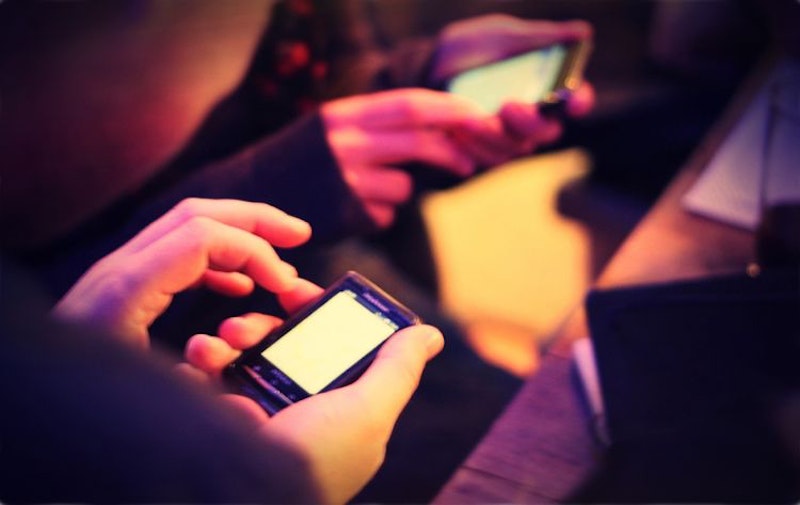 Last year I was still living on an island in the middle of nowhere. There weren’t many people, much less men my age, that weren’t missing most of their teeth. A friend mentioned a new dating app called Tinder, saying that it introduced him to a girl he’d been on a few dates with. Initially, pride stopped me from downloading the app. I considered how unromantic it would be to “meet” someone online. I thought about it for a few days, until late one night when I finally gave in.

The idea is simple. The user is presented with a few pictures and a brief description (age, location, bio) of someone and decides whether or not to like them. If they do, the person is sent a notification and can like you back. I probably went through hundreds of guys, finding that most of them had red flags. Some had pictures with their kid, others with their girlfriends. Most of the bios were descriptions of physical capacities, such as, “I pretty much live at the gym, lifting is life” or creepy promises like “Hit me up and I’ll treat you right!” I only liked about four. When they liked me back, I was given the option to message them. I started with one guy, who was actually across the Bay. The app showed him as six miles away, which was technically true if I had a boat or an airplane. The next suitor seemed aloof, responding with one or two words at a time. I was reminded that socializing on Tinder could be a pain in the ass.

The next day I got a message from a guy who I’ll call Westin. He seemed relatively normal, so when he asked to “hang out” I said yes. A few hours later, a huge red Chevy truck rolled up outside my house, smoke billowing out a single pipe in its bed. I wasn’t too surprised, as the area I lived in was mostly rural. I waited for him to come out. He didn’t. I slowly walked up to the car until I reached the window where a pit bull snarled at me. I stepped back and a tattooed arm reached out to hold the dog back. Hesitantly, I stepped up into the truck. Westin acknowledged me and analyzed me like I was a piece of fruit at the grocery store. I suppose I didn’t have any notable disfigurements because he started driving. Not sure where we were going, but I trusted that he had plans in mind.

After the dog stopped trying to kill me, Westin and I talked. I steered away from politics and religion, noticing a Confederate flag sticker on the dashboard and multiple cross tattoos on his arms. The situation looked dim. We got to a nearby town where he drove by all the restaurants and bars, instead pulling up to a small rancher. Confused and unsure what to do, I followed him inside. We sat on his couch for about five minutes, looking at each other. I guess he expected me to make a move, but I didn’t want to. I pet his dogs and smiled awkwardly until he shrugged, picked up an Xbox controller and lit a joint. I sat on the couch with his two pit bulls for hours as his bro friends came and went. We talked a bit until he agreed to take me home. We hung out a few times after that and did the same thing, watched a whole season of Orange Is the New Black, and then he stopped texting me.

Since then I’ve heard people talking about Tinder as a way to secure hookups, not dates. I understand now why Westin acted the way he did. I’m not comfortable with my generation’s hookup culture. I prefer the process of courting and dating, and relationships feel better to me than one-night stands. For those who don’t mind leaving out last names, the app could be effective. People get serious about being successful at Tinder, and there are some who take it to the extreme. I prefer the old fashioned method of meeting people, and it’s worked out well for me.