How to Win Your Next Break-Up

After seven days, you need to put on some pants and leave the house. 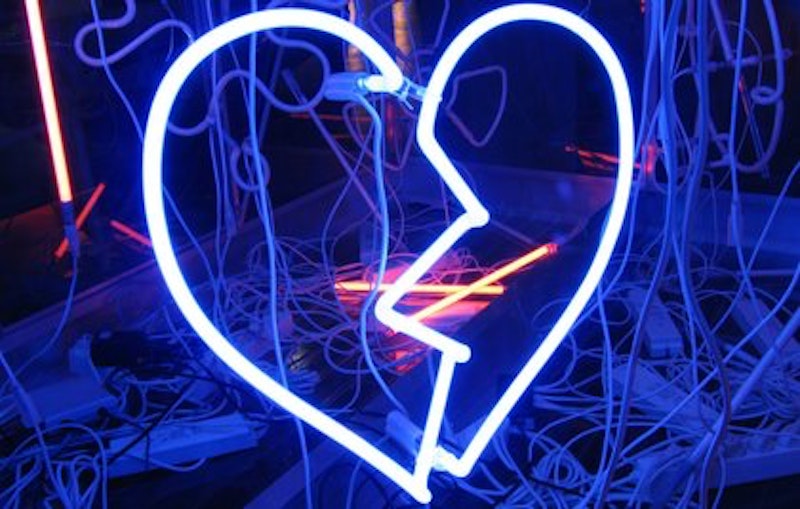 While the six wedding invitations hanging on my fridge seemingly indicate that commitment is in the air, it feels like breakup season around here. Yes, I’m shopping for a half-dozen his & hers (and hers & hers) towel sets, but most of my conversations lately seem to be with people who are splitting up the dogs, closing the joint bank account, and asking if I have an OK Cupid log-in they can borrow just to see who’s out there. We all know that breakups are the worst, and since my own messy inauguration into the world of the heartbroken, I’ve had plenty of opportunities to learn the best (and worst) ways to deal with the end of a relationship. The most important thing to keep in mind is that it’s a contest, so what follows are some tips on how to win your next break-up. These are generally written for the dumped rather than the dumper, who, while not immune from the sads, has a huge advantage. Good luck.

1. Embrace the pain. For one week.

You can’t think about anything other than how totally fucking unfair it is she dumped you right after she got a book deal (like, right after, even though you read every line of her really sort of exaggerated memoir seven times), and your friends know this, but we can only listen to so much bitching. Your pain is universal and understandable, but we told you to dump her months ago when you drank too much wine at dinner and told us how often you had sex (never). But still, you’re sad, so for the first week, go on that liquid diet, listen to Rod Stewart on repeat, and cry until your eyes are so swollen it looks like your makeup was done by a swarm of bees. While in your week of tears, I recommend listening to the Magnetic Fields’ classic album, 69 Love Songs, specifically track six, “I Don’t Want to Get Over You,” which will both make you feel less alone and make your realize how self-indulgent you’re being. Pay attention to this line in particular: “I could leave this agony behind, which is just what I’d do if I wanted to, but I don’t want to get over you.” Draw the shades and chain-smoke, but after seven days, you need to put on some pants and leave the house.

The idea of sleeping with anyone but your ex probably makes you feel nauseous, but take an Alka-Seltzer and find yourself a rebound. The purpose of a rebound is not to foster human connection or even to have good sex: it’s to remind yourself that you can still get laid. And you can! You probably haven’t been eating since he packed up his half of the Fiesta Ware, so chances are, you’re in tip-top shape for getting some strange. Thankfully, rebounds are most likely to be found at bars where the lighting is low and the drinks are strong, so slap some concealer on those eye bags and be glad you can’t eat when you’re depressed. Once you locate your rebound, do not, under any circumstances, think of him or her as a potential replacement for your ex. Falling into a new relationship right away is like treating a hangover with the-hair-of-the-dog: the shakes might go away for the moment, but you’re going to have to deal with the dehydration eventfully. Rebound and move on.

In the classic film A League of Their Own, drunk baseball manager Tom Hanks screams at an infielder who throws to third when she should have thrown home: Are you crying? Are you crying? There’s no crying in baseball! There is also no crying on Facebook. Facebook’s purpose is to break up your workday, normalize stalking, and inform you who is going to vegan brunch so you can avoid that awkward one-night who looks at you like you put tap water in her fish tank when really all you did was never call. Facebook is for laughs, not emotions, and getting all Conor Oberst on your status updates might feel good for a second—and let’s be real, you’re going through a break-up; feeling good is rare these days—but do you really want your coworkers, high school friends, and (even worse) your ex knowing that you turned his favorite t-shirt into a pillowcase just so you can smell his Old Spice while you sleep?

A public platform for your heartache is tempting because it’s all you can think about, but if you want to win this break-up, you must resist high drama and emotional over-sharing. No one likes that and certainly no one “likes” that. Change your relationship status and then continue as though nothing has changed.

Speaking of Facebook, until someone (me) invents the app that limits your ability to see your ex’s profile without de-friending or blocking them (I did a poor man’s patent on this, so don’t even try to Zuckerberg me), it’s going to take an immense amount of willpower to avoid looking at their page. As someone without willpower, I recommend blocking your ex. While you might want him to see your life-affirming status update about the seven hours of yoga you did yesterday, do you really want to see him tagged at brunch with some girl you’ve never heard of? No, you don’t. When it comes to break-ups, ignorance is bliss, so delete his number, block her g-chats, and de-friend the fucker who made you cry.

4. Do the things you want your ex to think you are doing.

You would probably rather spend your time with the ghost of Emily Dickinson than a bunch of upper middle class yuppies who give each other meaningful hugs, but get your ass to yoga. Yes, yogis can be notoriously self-righteous about their chakras and menstruating in sync with the full moon, but no one has ever regretted finishing a yoga class. You might hate every second until the final resting pose, but afterwards, you’ll be glad you put down the box of wine and put on your stretch pants. If you really, really hate stretching, get stoned first. Everything’s more fun when you’re stoned. And maybe the next time you to run into your ex, it’ll be after an hour downward-dogging your way to psychic balance and tight abs. When he sees how good you look, he’s going to feel bad, and that’s the goal, isn’t it?

The bad news about time is that it leads to hair loss, muscle degradation, the gradual waning of your sex life, and ultimately death. The good news is that it makes the poignant hurt of breakups temporary. In the beginning, you’ll think about it before you open your eyes in the morning. You may wake up crying. But after the first week, you’ll be in the shower before you remember that you’re miserable. And after another week, you’ll be on your second cup of coffee before you think about it.

Eventually, whole afternoons will pass when you aren’t wondering about your ex at all. And someday, maybe a few years down the road, you’ll have to look at pictures to remember just how one side of her smile was always a little bit higher than the other. You’ll forget her smell, her voice, the way she looked at you in the beginning, and even how very devastated you were when it all ended. You’ll start new relationships and those too will end, and you’ll have more break-ups to win and lose. Eventually, hopefully, you’ll find the one that lasts, and everyone else, even the girl you are sobbing into your mug full of red wine about right now, will be just be a memory. In the meantime, try to keep a low profile—don’t perform confessional performance art, show up at his new girlfriend’s house, or be the guy who cries at parties. Just make some tea, breath deep, and be glad that every second that passes brings you one step closer to fine.