I didn’t think Bo Burnham was funny until I saw his show. 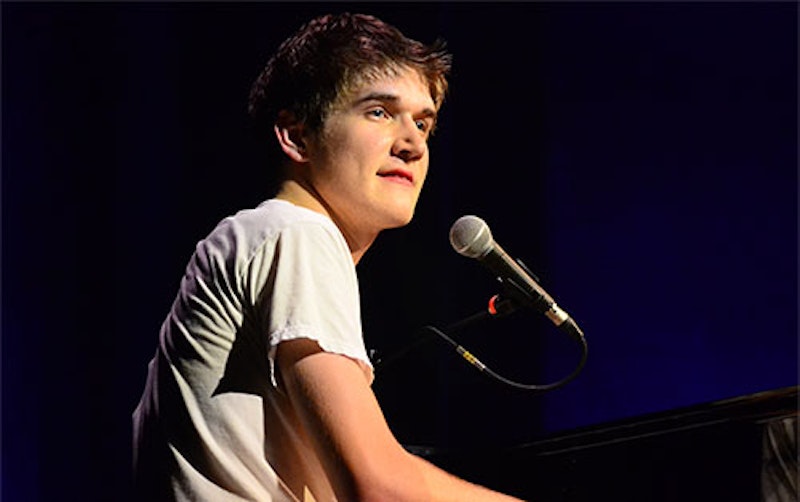 A friend of mine suggested that I listen to Bo Burnham, a comedian/musician who became famous via YouTube in the late 2000s. Unimpressed after a few songs, I forgot about the guy until that friend, Kyle, invited me to see him at The Lyric in Baltimore. Wanting to see Kyle far more than Burnham, I agreed to go. The theater was full of similarly dressed twentysomethings, us included, wearing the trendy uniform of millennials. We shelled out $14 for a beer and a cup of wine and maneuvered our way through a crowd of people, many of whom had eyes glued to smartphone screens.

Surprisingly, there was an opener whose first joke was about how disappointed he knew we were that there was an opener. Adam Newman, apparently a regular on Comedy Central, was almost funnier than the main act. His jokes had roots in high school humor, most of the punch lines including mention of genitalia. The 14-year-old in me laughed at the simple humor while 21-year-old me appreciated the writing and smooth transitions. By the time he left the stage we were both in tears, trying to contain ourselves for the sake of those around us. Burnham’s set began with a robotic female voice reminding us that we ought to remember; “The world is not funny.” Burnham walked onstage, and told a few decent jokes before sitting down at his keyboard and performing “Straight White Male,” a brilliantly funny song that made almost as many political statements as it did jokes. One verse included the lament, "I've never been the victim/of a random search for drugs/but you can't say my life is easy/until you've walked a mile in my UGGs."

By the time the song ended with a joke about American colonialism, Kyle and I were in tears again. The girl next to me wasn’t laughing, and I wondered if she’d known as much about the comedian as I had before coming to the show. Soon after, Burnham asked the crowd if they liked country music, and the group behind us cheered enthusiastically. Having grown up on Maryland’s rural Eastern Shore, my friend and I had similar opinions about the crappy country-pop music that would blare out of lifted pickup trucks in the high school parking lot.

Burnham continued with “Country Song,” about how bad modern country music is. One of the first verses includes the lyric "I walk and talk like a field hand/But the boots I'm wearing cost five grand," finishing with a play on the word “country.” The group behind us, much like the girl beside me, weren’t amused. While Burnham was introducing his next song, an audience member a few rows in front of us unsteadily stood up and said, “Bo! Can I get an autograph?” and the comedian was not enthused. “Sit down!” he said, “Could that possibly be a mutual interest you share with people who are politely sitting?” A few moments later, a slurred voice yelled out from the front row and Burnham, fed up, said, “Just get him out.” The security guards briskly escorted the man through a side exit. “Cool gruff chinstrap beard,” Burnham said, and made a joke about the heckler’s bad facial hair before starting “Can’t Handle It,” which began with jokes about Chipotle burritos spilling out and finishing with a truly sad verse, asking the audience to “laugh as he attempts to give you what he cannot give himself.” It was reminiscent of the beginning of the show, a reminder of the sadness of reality.

The crowd wanted an encore, and the last song was one I’d heard before seeing the show, “From God’s Perspective,” which wasn’t particularly funny because of the confusing Christian undertones. The rest of the show was hilariously uncouth, but a song about trying to gain God’s love was an odd way to end it. I realized that seeing a live stand-up show is very different from watching the recording. A television screen makes comedians seem distant, but sitting a few feet away, it feels like you’re just hanging out with a ridiculously funny stranger.