Anti-Racism Brought to You by Woke Ideology for Change

It’s easier to call out an insensitive white man than to put your job on the line for other people. 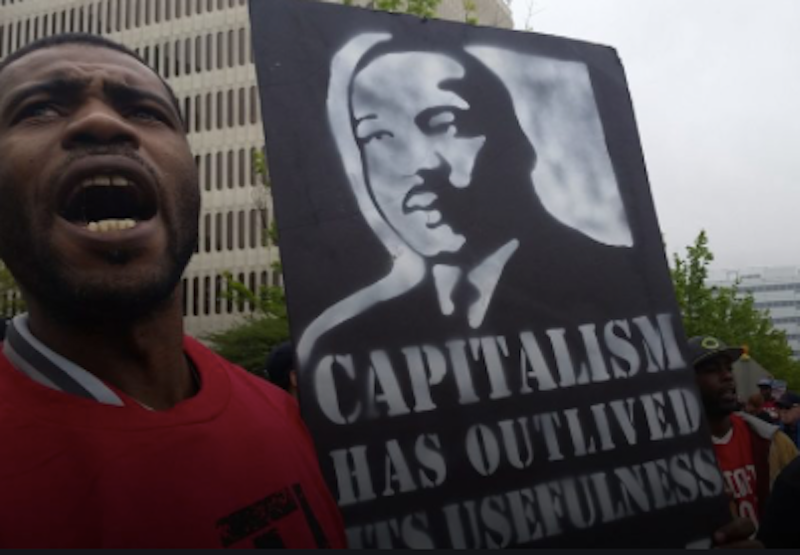 The seesaw nature in which racism weaves in and out of public concern is its own problematic issue partly brought to you by intermittent mainstream media narratives and video evidence. What’s unique about this moment though is the degree to which anti-racism has been commodified and packaged into consumable products.

Netflix now has a Black Lives Matter collection, and the top-selling books on Amazon are marketed to extract the racism out of an individual by teaching you about your white fragility. These monetized reformist methods have taken the movement of BLM and situated them to align with the socioeconomic interests of the professional-managerial class (PMC), the arbiters of cultural discourse. This isn’t the first time the PMC has co-opted social movements to serve individual class interests by shaping the playing field in which the battles are waged. This happened a few years ago when #MeToo was taken up by celebrity culture, turning a radical feminist movement into a pop culture feminist phenomenon.

Three years ago when sexual assault allegations against Harvey Weinstein were finally acknowledged and caught legal traction, the #MeToo movement exploded into mainstream consciousness and appeared to be an age of reckoning bearing down on patriarchy in higher class society. Higher class, because the context in which the mass majority of people were exposed to #MeToo was centered around the mainstream narrative of corporate and Hollywood elite men falling from their halls of impunity, even though Tarana Burke started #MeToo ten years earlier.

At the time, Burke made mention of this co-optation highlighting the clear class dynamic while not outright stating it. What happens when the PMC co-opts a movement is that radical ideas for restructuring power and building equity are turned into some form of cultural imperialism that touts tolerance over tangibles because this aligns with the liberal elite structure. bell hooks has written extensively about the mainstreaming of feminism and a shift away from radicalism, and this phenomenon can now be seen with Black Lives Matter. What started as uprisings against police violence on black lives and the burning down of the Minneapolis 3rd precinct, have now turned into peaceful rallies of solidarity marches with police departments and liberal reform policies calling for inadequate regulations and aversion to antagonism.

The so-called mission statement of the PMC reformist co-optation is to rake in profits and maintain the current class structure by policing discourse and rhetoric, virtue signaling, implementing academic approved policies of racism and sexism training, and atomize the movement so individuals are targeted for rehabilitation rather than redistributing power and removing oppressive ideological institutions. This is because PMC led movements are about protecting their class interests. In this context, resolving racism and sexism is only relevant within the walls of elite institutions such as universities, large media and financial corporations. Academia specifically is the quintessential ground in which permissive PMC reformist tactics flourish. Change through tolerance and education by centering individuals are baked within liberal ideology and woke rhetoric, but do nothing to build equity or some sort of universality. The PMC guided reforms to resolve racism in academia have been on full display as students pressured their universities to stand in solidarity with black lives resulting in department chairs, provosts and chancellors to flood .edu inboxes with statements expressing their support against police violence on black lives. Students responded to these statements by calling out administrative staff and faculty for not getting the language right, insensitivity or not inclusive enough. This response is typical in that their class interests were preserved and ally-ship was expressed as discontent over the nuance language of statements that appeal to tolerance rather than petitioning for any real universal material benefits such as those in the UC #cola4all movement. I suppose it’s easier to send an email calling out an insensitive white man than it is to strike and put your job on the line for other people.

The unfortunate reality is that it appears the PMC have turned anti-racism into the next pop culture phenomenon by exploiting racism for profit to preserve their class status. If we just teach people how not to be racist, the problem will be solved, and we won’t have to forsake any socioeconomic privilege. All those solidarity statements that came chock-full with resource lists for self-education on racism, white supremacy and fragility have led to the explosion of the diversity and inclusion industry that’s fully equipped with specialists trained in academic pedagogy that are ready to remove your racism. An approach only tolerable by those guilt-ridden white-collar professionals who want things to change without making any real sacrifices, because that’s the mantra of the PMC agenda for change.

We don’t have to look any further than how the PMC co-opted the #MeToo movement to see their idea of reform has done the exact thing it was meant to do: protect class status and virtue signal to feminism. The approach is to educate sexist tolerance by implementing menial policy changes that have led to little or no effect in the incidences of sexual harassment, and atomize the movement by putting the weight of defeating sexism fully on the shoulders of individual women to call out men directly.

Tolerance and discourse policing as the guiding virtues of PMC reform is reductionist and leads to resentment and further atomization. But as the power-brokers of cultural civility, PMC institutions can maintain their bona fides and insure their preservation by showing ally-ship and solidarity with black lives and feminist agendas by making inclusion statements, or participating in new campaigns such as “Stop Hate for Profit.” Spearheaded by Color of Change, the non-profit started by Obama’s former “green jobs czar,” the Stop Hate for Profit campaign is pitched to companies who want to virtue signal by removing advertisements on social media platforms such as Facebook. This is in response to Facebook refusing to regulate offensive language and misinformation that goes against the appropriate language guidelines of the PMC. Progressive companies like Patagonia have signed on because this is an easy way to show moral righteousness and protect your company’s economic interests rather than properly monitoring all your supply chains in 13 different countries that have been historically riddled with labor violations and human exploitation.

The quickness in which companies like Amazon and Netflix started capitalizing on anti-racism products was detestable. But this is the natural order when the PMC controls how anti-racism and sexism are to be approached: lots of white guilt and centering individualistic narratives of change. It’s not only capitalist corporations that serve the agenda, though, non-profits bolster by protecting the socioeconomic class ideology. The non-profit arms of these movements participate in abating any real change, which is evident in organizations such as Emily’s list who’ve sold out working class women, or how Black Lives Matter National has struggled with disorganization, unclear goals, and abuse of volunteers for the sake of serving hierarchy within the organization.

Class and socioeconomic privilege are preserved and movements such as Black Lives Matter and Me Too can only exist to support class status. All we hear are woke-washed platitudes and displays of alliance stating: We hear you, we see you, we love you, but fuck off and don’t touch our things.