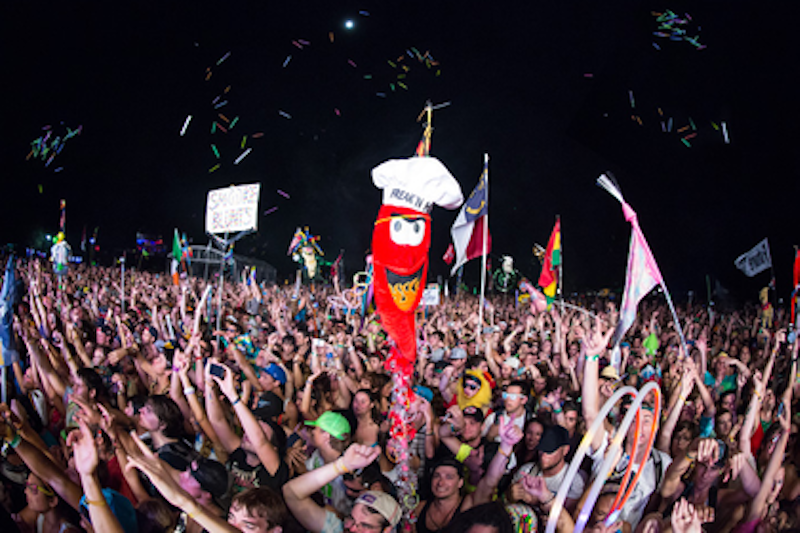 Music festivals have provided a social outlet for young people for decades. From techno to bluegrass, fans can enjoy their favorite artists from dusk until dawn. One of the fastest growing festival scenes is that of electronic dance music or EDM—a genre with hypnotic Pink Floyd roots and a powerful bass-driven beat. DJs stand like royalty behind their soundboards, pyrotechnics, and thousands of energetic spectators. This spring I experienced a few for the first time. In mid-April a few friends and I went to Rome, Georgia to set up a tent and submerge ourselves in Counterpoint Music Fest. With an unbeatable lineup of well-known DJs, indie bands, and the recently reunited Outkast as a headliner, the event attracted over 65,000 people. At $250 per three-day camping pass, the turnout was impressive. In a stunning 5000-acre venue there was enough space for even the most selectively social person to feel at ease.

Fortunately, cool neighbors surrounded us. Everyone was grateful to be there, which created a friendly, inviting atmosphere. In what seemed to be an attempt to inspire smokers to quit, the venue didn't sell cigarettes. Along with beer and hygienic products, smokes quickly became a tradable commodity. In the sweltering Georgia sun, my selection of sunscreen was a valuable item. Those who weren't selling posters, pins, art or drugs made a business of selling packs of cheap cigarettes. I met more than a few unforgettable characters during exchanges. In my search for a pack of non-menthol cigarettes, I ended up turning down drugs that I'd never heard of. I assumed that most of them contained a trippy mixture of caffeine and flour.

The other event was local. Thank You Fest took place this month at Merriweather Post Pavilion in Columbia, Maryland. Unlike Counterpoint, which was exclusively 18 and up, Thank You allowed all ages. The difference was evident before we even entered the venue. In the parking lot, hordes of loud, hormonal teenagers evoked moments of nostalgia as I fondly recalled maneuvering through the halls of my high school. Many seasoned fest-chicks at both venues sported ensembles of neon bras, tiny spandex shorts, and Yeti-inspired knee-high fuzzy boots. The absence of clothing was more predominant among the younger crowd. At Thank You Fest, I noted a surprising amount of middle-aged men who I thought were helicopter parents until I heard one of them comment on a 15-year-old's ass.

In Georgia and Maryland I saw people under the influence of various chemicals. Daytrippers wandered with wide eyes, stoners hung out, sweat-covered bros rolling raged, and numerous others entertained us with questionable drug-induced antics. Those who chose to indulge tended to keep to themselves, though there were sketchy characters trying to sell us God knows what. On the second morning of Counterpoint I saw a girl who had overdosed lying on the lawn in a fetal position. The EMTs and security were attentive and kept the small, worried crowd calm. I didn't know what she had been using, but at a recent EDM show at TD Garden in Boston 40 people were hospitalized for lethal combinations of various drugs and alcohol. Like the girl I saw, many of them were in their teens or early 20's and found to have been using Molly, a more potent version of Ecstasy.

I found the music and environment intoxicating even without invoking my brain to produce a flood of serotonin. I can't say I never have, but it's nice to remember the fun I had in its entirety. Since most of us lack the understanding of chemistry to produce our own drugs, the ones that are available are not always legitimate. I was reminded of the value of harm reduction education every time I was offered something. Like most people my age I was taught abstinence in school which has proved to be counterproductive outside of the classroom. A class on street smarts would be more realistic and could have saved the girl I saw from a life-threatening predicament. I wholeheartedly enjoyed both festivals but saw that fun can come at a cost if you don't have a modicum of self-control. It was enlightening, though, to see the developing niches of my own generation, sober or not. Standing by the entrances was like watching a parade. Smiling young people were festively dressed, often carrying signs displaying pop culture references, words of peace and love, LGBTQ pride, or the artist they came to see. Compliments were given unabashedly and fast friends were made. It was refreshing to see people my age at their best, defying the bad press Millennials are often tarred by. For the first time I felt proud to be one of them. I was surrounded by artists and free thinkers who, in their weirdness, gave me hope for the future.