Rescuing a dog shouldn’t be so difficult. 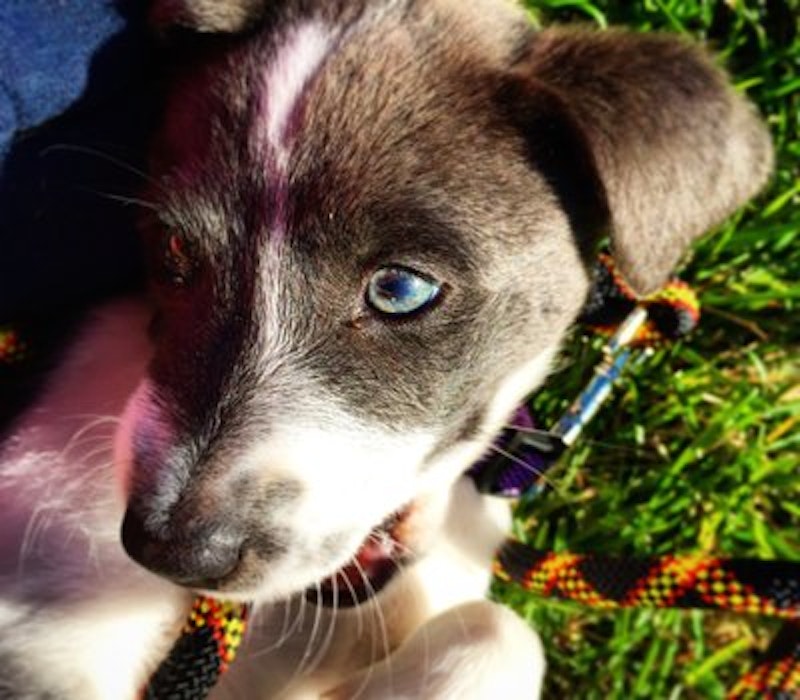 The building I live in was on the market for months. Emails about apartment visits came constantly, giving my boyfriend and I no more than the required 24-hour notice. Strangers inspected our place at least once a week, and it wasn’t until one woman tracked mud in our kitchen at 10 a.m. and began picking at the floor to determine if it was “real wood” that I decided I’d had enough. After contacting our management, it was determined that our apartment would be skipped in further home visits.

The day the building was sold was a happy one. Sure, we’d miss the funny plumber and overanxious pest management protocol; but the visits were over, and we had a question to ask the new landlords. After receiving the first email from them, we timidly responded with a few sentences and asked, “Can we get a puppy?” The landlord answered quickly. Fortunately, the guy was a dog person and owner of a rescue. The only stipulation to the dog agreement was that we had to pay a few bucks more for rent and get the carpets cleaned when we left.

It was a relief, because we’d begun looking at dog-friendly places to move to when the lease was up. Before asking the landlord, we’d been looking at puppies online. Checking Craigslist every few hours, we texted links back and forth. Many of the sketchballs who were selling dogs ended up being backyard breeders who kept them in small enclosed spaces outside, usually still on chains. There was an overabundance of pit bulls, and though we would’ve loved to rescue one of them from a potentially horrible life, many landlords won’t accept pit bulls. This is despite, as John Woestendiek of The Baltimore Sun points out, the fact that the most innately aggressive dogs (in order) have been proven to be dachshunds, Chihuahuas, and Jack Russell terriers.

Eventually we started looking at non-profit shelters. The obvious first choice was the Baltimore Animal Rescue and Care Shelter, or BARCS. Most of the dogs there, unfortunately, were pit bulls. Their adoption fee was $75, which included vaccinations, neutering, and micro-chipping. We checked BARCS’ website daily, but it was rare to see any dogs that weren’t pits, much less puppies. PetFinder, a site that compiles dogs from a number of non-profits, was worse than Craigslist. One of the first puppies listed right now is Gretta, who’s described as a lab shepherd mix but looks suspiciously like a pit bull. In her description, it’s stated that to adopt her one must fill out an application, and if it’s accepted, pay an adoption fee of $250.

Many listings also lead to Tara’s House Rescue, which claims to save dogs from high-kill shelters, and they do have pit bulls, all with adoption fees around $280. One obvious issue is that the shelter only houses the puppies for a few days before they’re adopted. Only a few months old, the puppies can’t be fixed or receive more than a round of vaccinations. The few days of care that Tara’s House provides is not worth $280, or even $50. On the other hand, their adult pit bulls, the only dogs there truly at risk of being put down, are likely at the shelter for much longer. There are other adult dogs, but non-pit breeds have an “adoption donation” of about $300. Tara’s House obtains donations by other means, too. It’s clear that the shelter is cashing in on puppies and nice looking, decently bred dogs, neither of which needed to be rescued from another shelter to begin with. There was a striking amount of puppies in these non-profits, explaining why BARCS and other similar shelters didn’t have any.

As if the price wasn’t enough to deter us, the adoption process included an interview, a reference check, and a home visit. These are invasive and unnecessary measures for dogs that are in need of homes. Tara’s House isn’t the only shelter that does this, but it’s a good example of a non-profit that’s making serious money. Payscale reports that the average directors, directors of development, and executive directors of non-profit animal shelters make about $57,000 a year. Other employees, like managers and volunteer coordinators, bring in around $35,000. Not a bad deal for someone who does paperwork and maybe a few home visits while volunteers take care of the dogs.

After giving up on Petfinder and non-profits, we resumed our Craigslist search. One Tuesday, my boyfriend found a listing in North Carolina for a cute nine-week-old border collie-lab mix, a female, which we’d been looking for. Her fee was $90. I texted the number in the listing and asked when we could pick the puppy up. The stranger responded, “today wud b good.” We discussed the prospect of blowing off class and taking a trip from Baltimore to the southern tip of North Carolina to pick up a puppy. After letting the puppy owner know we were planning to drive to North Carolina and having her refuse to drive more than 30 minutes to meet us, I grabbed some snacks and the puppy blanket I’d bought and we ditched class.

The drive down was miserable. We hit rush hour in DC, again in Richmond, and intermittently sat through some bumper-to-bumper traffic because of construction and accidents. I called the person we were meeting, and explained why we were going to be late. She asked, “Where are y’all coming from?” I told her, “Maryland.” There was a pause. “So, is that from the south or the north?” Another pause. “Maryland, the state. It’s north of you,” I said. Several times in subsequent conversations, she asked where Maryland was. Nonetheless, we decided to meet at a Steak n’ Shake just off the highway.

After eight hours of driving, we made it to the pseudo-vintage diner and endured angry glares from waitresses for sneaking in to use their restrooms. The puppy girl showed up in a banged-up red Mercury. I didn’t see the puppy, and for a moment I was nervous. When she got out, it was clear why I couldn’t see her. She was so small and delicate that I was afraid to pick her up. There was no way she was nine weeks old. Regardless, she was adorable. She immediately ran up to us and licked our faces, shaking from the cold, eager to be held in warm arms, . The girl claimed to have picked up her and her brother from another woman on Craigslist, but because of a change in her job, couldn’t care for them. There was a yappy Bichon Frise with her that I suppose she could care for, and after a few minutes she casually mentioned that he had fleas. “I just saw, like, one,” she said, “I’ve been sprayin’ little Grace with the flea-spray, so she definitely don’t have ‘em.” My boyfriend and I exchanged looks. We gave the girl her $90.

After a quick Wal-Mart run, we treated her for fleas. Between the names Luna and Lily, it was decided that she was more of a spunky Lily than a shadowy Luna. During the ride home, this time hitting morning rush hour, Lily slept quietly in my lap. When we got home, we saw that she was infested with fleas, and despite her thinness her stomach was round and tightly stretched, indicative of worms. She was uninterested in the ritzy grain-free puppy food we tried to feed her. We had no choice but to make her sleep in her crate in the bathroom, for fear that her fleas would take over our apartment. It was 8:30 a.m. when she was finally situated, and I had class at noon. My boyfriend slept on the floor next to Lily while I took a nap.

Lily’s lived with us for a month. A vet confirmed that she was younger than her previous owner told us, taken from her mom at about six weeks. After some vaccinations and two de-wormings, Lily is up to a healthy 10 pounds. Veterinary assistants and some strangers have asked why we think she’s mixed with a lab, because she looks like a purebred smooth coat lilac merle border collie. The girl we got her from won’t answer our texts, which make us wonder if she truly got the puppies from a lady on Craigslist or if they were obtained illegally. Regardless, we saved Lily from a bad situation, and have spoiled her ever since.