What Happened to Lexington Market?

A historic Baltimore destination needs some fixing up. 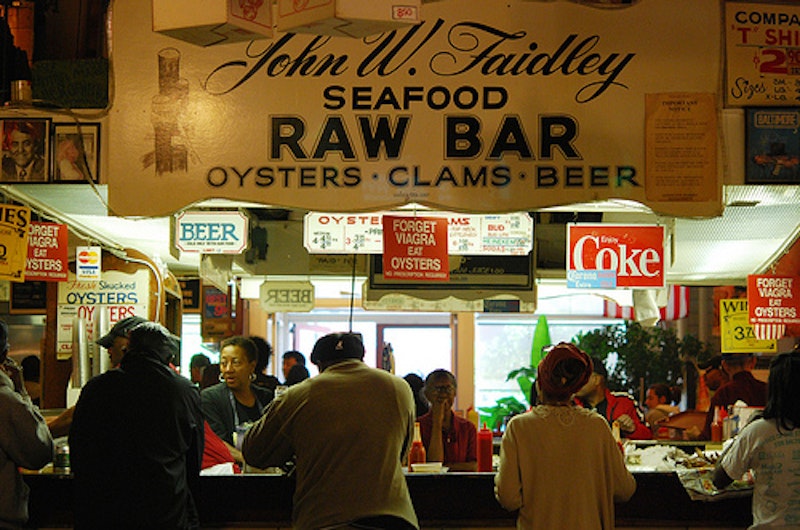 My mom came to visit earlier this week for our monthly lunch date in Baltimore. Instead of walking to a restaurant near my apartment, we drove to Lexington Market. Though neither of us had gone, we’d heard stories of its rich and extensive history.

Since 1792 it’s been a Baltimore destination, attracting different crowds as politics evolved and the economy changed. After the Civil War it sported elegant tablecloths and high quality food, catering to high-ranking officials and politicians. Ralph Waldo Emerson named Baltimore the “gastronomic capital of the world” after visiting the market. It continued to be hugely successful in the early 1900s. Its style changed with the influx of immigration, which brought exotic food and more vendors. Business boomed until a fire broke out in 1949 that nearly destroyed it. A renovation was done and the market survived.

When my mom and I visited, we had no idea that residents have begged for a restoration for years, prompting officials to plan a revival for the Market. The neighborhood surrounding it needs cleaning up, though that often means a few Starbucks’ and chain restaurants. When we walked in I was taken aback by the amount of homeless people, wandering around like ghosts begging for money. I told my mom that it’s best not to respond, even if it feels wrong. She did well for the first hour as we walked between what felt like hundreds of vendors selling mostly greasy variations of American, Greek, Chinese or Italian cuisine. We dodged dozens of sad-faced adults pleading for food or money, obviously upsetting my mom. I was annoyed. We couldn’t walk in any direction without being hassled, cat-called, or bumped in to. I felt like I walked in the middle of a drug deal at least twice.

As we were picking out desserts at Berger’s (the only truly worthwhile stop of the day) an apparently homeless woman approached my mom. “Ma’am? Ma’am? Ma’am?” she whined, until my red-faced mom gave in, politely responding, “Yes?” The woman went on for 10 minutes, telling her stories of her sex work and domestic situation. Finally she asked my mom to buy her the most expensive item that Berger’s offered. The girl behind the counter looked at my mom and frowned, turning to the woman and saying, “You have money. We see you all the time.” The woman started to scream, “Don’t you disrespect me!” My mom bought what she asked for and continued listening until I nudged her and told her it was time to go. We were approached a few more times on our way to the door, each time walking a little faster.

We left that day, happy to have experienced the historic landmark but happier to be on our way. The Berger cookies were delicious, but not worth going back into the zoo that Lexington Market’s become.